Divyadesams are sthalams where the great 12 Alwars praise Sriman Narayanan with Mangalasasanams.


Purana sthalams are the temples where the Perumal and the sthalam in which he resides are well explained in bhagavath puranam and on various puranams.  The Bhakti is also spread throughout our Country in the same way as to how India is surrounded by Oceans and the Sea.  Emperumaan Sriman Narayanan who is the Paramathma is found in all of the minds and heart of the Jeevathmas, is found from Kanyakumari to Himalayas in various Thirukkolams [postures] in various Sthalams.

In this section, I would like to bring before you a complete picture about these great Purana Sthalams other than the 108 Divyadesams.

*Location : Maharashtra
*Deities : Sri Pandarinathar and Sri Rukmini Devi
*Special : The speciality of this Sthalam is the position in which the perumal is found. 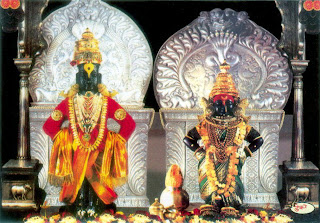 The Deities :
The Perumal of this sthalam is Sri Pandurangan. He is also called with the names 'Sri Vittobha' and 'Pandarinathan'. He is found to be giving his seva in Nindra thirukkolam facing his thirumugham towards east direction.

The Perumal gives his seva in such away that he keeps his two hands in his hip and found to enjoy the Bhajans of Bhagavathas. 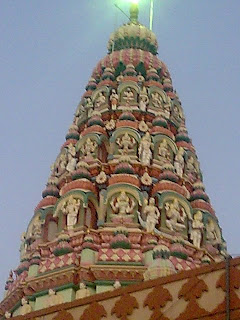 General Information
1. This sthalam is also called as "Pandarpur".

2. Since, the Perumal stood in a place called "Pandari" this sthalam is so called as "Pandaripuram".
3.  2 Kms away from Pandaripuram there is a place named "Gopalpur", where a Vishnu Paadham [divine feet] of Sri Vishnu is found.

Speciality of this Sthalam

The speciality of this sthalam is the position in which the perumal is found. His hands are placed in his hip and the expression of this posture explains that he is enjoying the Bhajans of his devotees.

There is another great specialty in this sthalam and it is the way we worship the Perumal. They adopt a process called "Padha Sparisa Seva" which means that we can place our fore head touching the divine feet of the Perumal in Garbagriham [Moolavar Sannadhi]. It is considered as very auspicious if we do it on Wednesdays.


In earlier times, this location [where now Pandaripuram is found] was known as "Thandiravanam". In the nearby forest area, there lived an aged couple by name  Muthabhai and Sanadevan. They had a beautiful child by name "Pundareegan" and he had  great love towards his parents.


The story goes that, Indiran killed an Asuran, Virutharasuran, and he was given a sabham[punishment] that he would become a brick / stone because of his sin and as a stone, he was thrown in front of the house of Pundaleegan.


This being the case, Lord  Krishna wanted to test the love and affection of Pundareegan. When Bhagavan came towards his house, Pundareegan was serving his parents. Sriman Narayanan asked him to come out of the hut, but Pundareegan, doesn't want to break the service that he is doing to his parents and asked Lord Krishna to stand on the stone that is placed in front of their hut. But, soon after Sriman Narayanan's divine feet was placed on the stone, Indiran got his original appearance and thanked both Lord Krishna and Pundareegan. 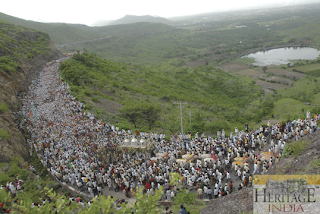 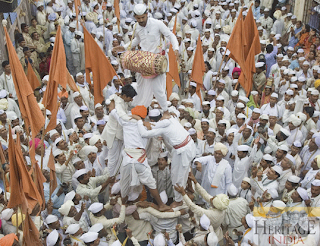 
There once lived in this place, a person called "Gorakkumbhar". He had  great faith and bhakti towards Sri Pandarinathan. Just like how we breathe and release air, he expressed Vittalans thiru Naamam and chanted it. He led his life by making pots. To make pots, the clay, sand and water needs to be mixed together and they usually mix it using their feets. One day while he was stamping to make the clay, his small child just happened to come near the place where he was stamping the clay. Because of joy and the bhakti, along with the clay, he accidentally stamped his small child also. And after some time, his wife returned and searched for the child, but could see only the cloth of it, which got mixed with the clay. Then only, she came to realize that her child has been killed in the process of making the pots.  Gorakkumbhar and his wife cried and the Perumal as Sri Pandurangan came in front of the couple. He gave back the life of the child because of the great bhakti of Gorakkumbhar. The Paintings and the expressions of this story can been seen in Pandaripuram temple. 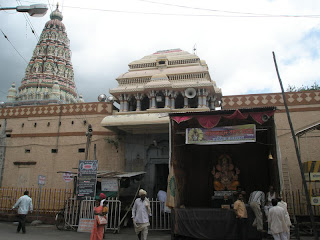 
On the south direction of Chandrabaga River, Sri Vittalan temple is located. On the south side of the river, Chakkubhai temple is found. In front of the Moolavar Sannadhi, a big mandapam is found and all the bhaktas sit in this mandapam and perform Bhajans and expressing the Naama "Jai Jai Vittala - Panduranga".


On the left side of this Mandapam, a huge pillar which is covered with silver coating is found and it is believed that Sri Narasimhar came out this pillar to rescue Prahaladhan, It is said that the people who visit this temple, place their forehead in this pillar and worship the Perumal.


Milk Guava, Laddu, corn are given as the Prasadham in these places.


There are lots of other Sannadhis for Sri Ganesha, Sri Garudalwar, Hanuman, and Saurangi Devi etc.  And, a separate Sannadhi for Pundareegan is found on the shore of the Chandrabagar River.


Places of InterestAll the Bhaktas should visit this great shrine atleast once in their liftime to have darshan and also be showered with Lord Krishna's  Blessings.


1.  Pundalika Temple - The Pundalika Temple is about a half km from the Vitthala Temple. This temple marks the spot where Pundalika, the Lord's devotee, spent the last years of his life. It is in the middle of the riverbank.

2.  Vishnupada Temple - The Vishnupada Temple is about a kilometre south of the Pundalika temple. The Vishnupada Temple is in the middle of the river connected by a causeway to the shore. During the rainy season this temple is under water for about three months.In the middle of this temple is a square five feet by five feet. There are three rocks in this square that have the foot-prints of Lord Krishna and of a cow embedded in them. Krishna's footprints are in two positions. In one position He is standing on both feet, and in the other position He is standing on His left foot with His right foot crossed and resting on His toes. There are footprints of a cow at each corner of the square. 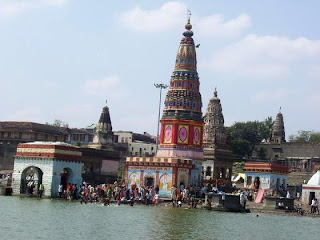 
By Road
There are lots of transportation facilities available to reach Pandaripura sthalam. One can reach Pandaripuram through a separate path, which is found near Meeraj - Nakaj - Sangoli near Kolapur. While traveling from Hyderabad to Pune, through NH - 9, which travel via Kolapur and Mokkol, we can reach this sthalam. Through NH 13 - while traveling from Bijapur to Kolapur, a separate road leads to this sthalam.


By Rail
While traveling from Chennai, one has to travel from Chennai in Mumbai Express from a junction by named Kurdhuvadi, a narrow gauge train will lead us to Pandaripuram. So, one has to get down in Kurdhuvadi and from there we can reach Pandaripuram. Even we can reach this sthalam from Mokkol railway station and from there, this sthalam is reachable and is 40 Kms away.


By Air
There is no direct flight to Pandaripuram. But, however the nearest Airport is Pune. From Pune, Pandaripuram is about 213 Kms. Distances between Pandaripuram and various major cities / towns.

Madam, your essay on pundarika is very nice. Recentrly I visited Pandaripuram, but cannot understand who is panduranga, sthala purana, because I belong to tamil nadu. But through your divya darshanam blog I am able to understand the story of Pandaripuram. Mamdam you mentioned in the essay, that pandari puram is located in karnataka, but it is located in Maharastra, on the shore of Chandra Bagha river, and we can alight at sholapur, and pandaripuram is 67 km from sholapur. regards, Puttu Guru Prasad. pgp4149@gmail.com.

Thank you so much for giving us details about pandaripuram. I have never been to this place, but came to know more abt pandarinathar temple thro ur blog..hope one day, i will visit this temple... thanks again..

Madam, thanks for the details about the temples at Pandaripuram. Lot of information we could obtain through the write up in your blog. However, i cannot know any information about the availability of lodging facility for pilgrims visiting pandaripuram. If this is added that will further help people.

great explanation indeed..was very useful for me while guiding my parents.