Ujjain is situated on the banks of the Shipra River, in the state of Madhya Pradesh, in central India. From times immemorial this area and the Shipra River have been considered as most sacred.Ujjain is known for the famous Mahakaleswar Temple which is among the 12 celebrated Jyotirlingas in India. The Mahakaleshwar temple is located near a lake and has five levels, one of which is underground. Brass lamps light the way to the underground sanctum of the temple. The glory of this temple has been vividly described in various puranas.

Temple Dedicated To Lord Shiva -The Destroyer of Universe 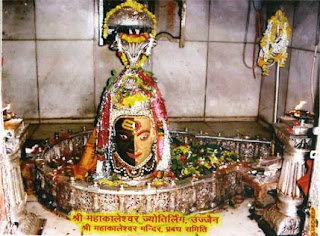 MahakaleshwarTemple, mentioned by the great poet Kalidasa in his works, is dedicated to Lord Shiva, the Destroyer of the Universe. The Shiva linga is worshipped throughout India as it symbolises Shiva’s incarnate power on earth. On the other hand, a jyotirlinga is the swayamabhu [self-manifested] linga, which is found only in 12 places in India.

One of the rituals performed in this temple is the Bhasm Arti that involves smearing the linga with hot ashes from the burning ghats [cremation grounds]. Shiva is believed to dwell in cremation grounds, and the ash-smearing ceremony is a homage to the Destroyer of the Universe himself. This form of worship is symbolic of Death and Life being inseparable, an idea that is inherent to most of the Hindu schools of thought. The idol of MahakaleshwarTemple is called Dakshinamurtias it faces south [dakshin: south, and murti: idol].
It is also regarded as one of the top 10 Tantra Temples of , and has the only Bhasm-Aarti [ash ritual] of its kind in the world. However, does it live up to its hype? 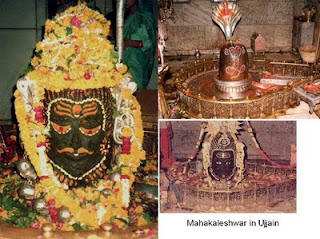 The first thing you hear when you tell locals that you are planning to visit the Mahakaleshwar temple is that you must ensure you attend the “Bhasm-Aarti”. The Bhasm-Aarti is the first ritual conducted everyday at the temple, which is to wake the God Shiva up, perform “Shringar” [anoint and enrobe him for the day] and offer the first aarti [an offering of fire to the deity by circulating lamps, incense and other items]. The unique thing about this aarti is, however, the inclusion of “Bhasm” or ash from funeral pyres as one of the offerings. Mahakaleshwar is a name for the God Shiva, and means the god of Time or Death. This may be one of the reasons of the inclusion of the funeral ash. You will be assured that this aarti is something that you should not miss. The aarti begins only when fresh ash is brought in.

The Aarti begins at 4 a.m. and if we are to offer our own puja [prayer] separately, we will have to do it only after the aarti is over and we might have to wait for a couple of hours.  There are two ways to gain entry into the temple to watch this aarti –- one is through the free entry line, where you don’t have to pay except for any offerings that you want to take in. The other is through a “VIP” ticket, which lets you into a shorter line and helps you gain quicker entry to the sanctum. Furthermore, if you’re in the free entry line, you’re allowed to wear what you want, as long as it is appropriate. If you’re in the VIP line, men have to wear the traditional dhoti, and women must wear sarees.

VIP tickets are available at the shrine board  only between 12 p.m. and 2 p.m.
The “VIP” ticket is a feature followed by some of the most popular temples in  However, the perks of the “VIP” ticket vary.  Using a VIP ticket shortens the wait time to about two hours or less.  But, the free entry and VIP lines merge before you enter the sanctum, so that eventually there is no difference in the two entry types.

In , however, it is found that a  VIP entry assures you really that " VIP treatment".

Reconstruction of The Temple

The original temple was destroyed during Muslim invasions, and the temple was rebuilt recently by the Sindhias in the traditional Central Indian style.
It is a five-storeyed structure at the south end of the city. The curved superstructure is adorned with motifs on all sides, rising above the colonnaded porches.
Along the walls of the corridors in the temple rest old statues and sculptures, while in the courtyard lie ruined ancient shrines.

The storeys are ornamented with pierced balustrades, and the balconies have richly decorated roofs reminiscent of the Rajput style of architecture. Screens and pavilions are combined with marble colonnades leading to the linga within the sanctuary, making Mughal architecture come alive right in the heart of this Hindu temple. The Mahakaleshwar Temple is indeed a cherished site and a sculptural delight as well.
the city of , situated in western Madhya Pradesh, will draw devotees in lakhs every year when the Simhastha festival - better known as the Kumbh Mela - is celebrated from April 5 to May 5. The festival is called Simhastha due to the configuration of celestial bodies so that the sun is in Aries and Jupiter is in Leo - known as Simha rasi. It is customary for devotees to take a holy dip at this time. A snaan [bath] in the river Kshipra during the Simhastha is a way, feel the devout, to be absolved of all past sins.

The Puranas tell us that when the Devas and Asuras churned the to obtain the nectar of immortality - amrit - their joint venture resulted in a skirmish when both parties wanted to monopolise the fruit of their labour. As soon as Dhanvantari, the heavenly physician, emerged from the ocean holding the pitcher of amrit, one of the demons snatched it from him and ran off. The Gods followed in hot pursuit. Of course, later as Lord Vishnu intervened, taking the form of the enchantress Mohini, the demons were tricked into giving up the nectar, and the Gods turned out to be the immortals after all.

However, one benefit for humanity from this dispute was that some drops of the nectar spilled and made a few places on earth into the holiest of pilgrimage spots.

These holy cities where the nectar spilled are believed to be Haridwar, Prayag, and , which are the venues for the Kumbh Melas.

Kumbh Mela In Haridwar, Prayag, Nasik and Ujjain
Allahabad of Uttar Pradesh is the place where three holy rivers - Ganga, Yamuna and Saraswati meet each other. the prayag is knows as a point where these three important and big holy rivers of India come and meet together. Kumbh mela at Nasik Maharashtra is also a very famous. nasik is situated on the banks of famous and holy Godavari river. Nasik is popular palace where godavari river come down.
Haridwar of Uttar Pradesh is a very holy city and it is the place from where the river Ganga enters the plains from Himalayas. Haridwar is also famous for kumbh mela or kumbh fair. Ujjain of Madhya Pradesh is a very holy city and it is situated on the banks of holy shipra river. Ujjain is also famous for many temples including mahakaleshwar temple of lord Shiva. the kumbh mela of ujjain is also having a much important place in Indian culture.

A view of the illuminated spire of the temple.

As  braces for millions of visitors every year, security arrangements and infrastructure need to be prepared on a war footing.

The Mela site covers 2152 hectares, divided into four zones and 10 sectors to accommodate devotees and akharas. Seventy-four kilometre-long pipelines are being laid for water supply, and four sub-stations have been set up to supply power.

Some of the material advantages to the city of this mega event may be of a lasting nature. For instance, some of the old historic temples are being renovated. The area around the Bhagwan Mahakaleshwar temple is being developed. The administration also promises adequate security arrangements and a vaccination drive to prevent epidemics. In addition, seven satellite towns have been made on the approach road to the city, to provide travellers with medical requirements, tele-communications facilities and other necessities, including enquiry offices and police stations. These arrangements are being made with the help of the local people and voluntary organisations, according to information provided by the Government of Madhya Pradesh. 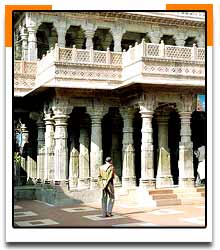 How to get to this Temple:

When travelling to  from , pilgrims can fly to , the nearest airport, and continue by road. It is a 55-kilometre car ride.  is also well connected on the railway network.