Temple in Konerirajapuram - [Kumbakonam] - The Lord Who Cures.

This Posting of mine is in response to a person who has read my earlier Posting on " Temples at Par with Kasi" and written his comments -dated 18th of December,2011, [ he has not furnished his name nor his email id].  I was very much moved by what he had written.  Hence this Posting of mine.

His comments I give below for the viewers:

[".....Namaskarams to all who are reading this blog. My brother-in-law, 43 years (sister's husband), is diagnosed with cancer last year and he is going through hell. The trauma that his little daughter and his wife is going through cannot be expressed in words. We are doing prayers and holding His feet to make our brother-in-law to come out of this disaster. Can anyone let me know if there is any specific temple worship, pooja which can bring down his pain and our mental sufferings..."]

I would like to enlighten him on two of the Temples which I am sure will give his family some sort relief and free him from the mental agony he is going through at the moment. My Prayers are with his family for a peaceful life ahead in the coming years.

The two Temples for CURE are listed below.  I will cover both the Temples for your interest.

Now let us move on to the Temple in Koneri Rajapuram as mentioned above...

The Shiva temple at Konerirajapuram is located 8 Kms from Aduturai railway station which is on the Mayiladudurai - Kumbakonam section of the Southern Railway. 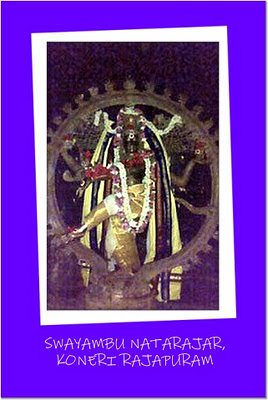 The main God in the temple being UmaMaheswaran in the form of lingam. The temple priest said that the Garbagraham has four pillars resembling four vedas. The main God in Lingam form is too big and beautiful with lots of Rudraksha beads decorating him. The temple is calm , quiet and has good ambience. The back side of the garbhagraham in the temple is in the shape of elephant's back , which distinguishes it to be build by a Chola King. The temple's garden has rare spiecies of Vilvam tree in it.The temple has the largest metal cast Nataraja in the world, bigger than the one at Chidambaram which is of size: 8.5'x5.5'.Temple's History :
The Chola king Kadaraditya Cholan and his wife Sembian Mahadevi were pious and asked the Sthapathi* to make a Lord Nataraja's statue in five metals or pancha loha which is tall and appealing . The Sthapathi was an ardent devotee of Lord Shiva and was very happy with the King’s order.The Sthapathi is a person who works on art of making icons, with the required quantity of metal, i.e. copper brass & lead in the ratio of 82%, 15%, & 3% respectively is collected in a crucible and heated to get converted into liquid form. Simultaneously the karu (mould) is also heated. The mould becomes red hot. It is then buried in the ground up to the mouth of the mould, to get firm upright position. The hot liquid metal is poured into it. The mould is allowed to cool gradually. Then the wire bindings and iron rods are removed. The mould is broken open. Now rough metal image is obtained. Then it is chiseled, filed, and engraved to get fine ornamental statue.
The Sthapathi after receiving the order, works hard and presents the statue moulded to the king. The Kandaraditya Chola king isn't happy and asks him to make a Nataraj statue which is more alive, tall and appealing. The Sthapathi shows three casts of Nataraja which came upto 3 feet height but the King rejected them and gave him last chance to make it and ordered to chop his head if Sthapathi fails.

Picture of the Three Statues made by the Sthapathi: 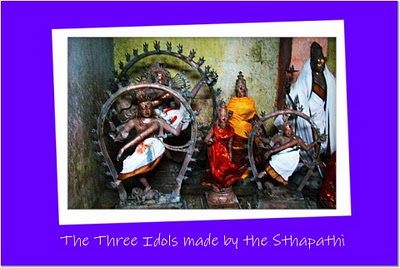 He set to work , but since the  three casts of Nataraja were rejected by the King, He gave an ultimatum to the sculptor .Not delivering goods before the stipulated time would see him out of the Chozha Desa or  have his head  chopped. . The Sculptor was very depressed. He set to work. He had just a day more to present his work and he was still at work. He had a pot full of molten metal and was wondering whether to start the casting .He was praying to the Lord to make his creation   appealing to the King. An old man and his wife came near him and asked for some water to quench their thirst. The Sculptor in no mood for hospitality, told the Old Couple “ There’s no water. If you want, drink this molten metal” and was stunned and horrified to see the Old Man taking the pot and drinking the contents and giving a little to His wife too. Slowly, in their place there emerged two Vigrahams, one of a majestic, large Nataraja and by His side a very beautiful Sivakami.

The King walked in at that time and was extremely happy to see the icons. The Sculptor was shivering with devotion at the Lord’s magnanimity and related the episode and denied having made the Vigrahams. The King was furious and called his tale a lie and raised his sword , which struck the lifted right foot of the Deity. Blood spurted out and  splashed  on the King who developed leprosy. The Lord then appeared to all present there as Vrishabharoodar and told the King “   I am here in the form of Lingam as Vaidyanatha . Offer prayers to me and perform abhisheka and you will be cured.” He did. And he was cured. All the devotees who have utmost faith in this Lord, are believed to be cured off their disease. 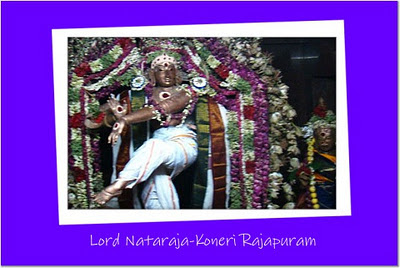 When the doors of the sannidhi is thrown open to the devotees gathered at the temple, where the idol of Lord Nataraja is installed, you are taken aback in astonishment and there are no words to describe the feeling ....what they felt. He stands there, so realistic. His arms, feet, fingers, lips, eyes and every part of the body is said to be breathing life!!  There is a mole under the left arm. The nerves and muscles are visible.The priest says there are tiny hairs which drop during the abhishekam on Thiruvathirai . The scar on the right foot where the king’s sword struck is visible. And the smile…is divine ... capturing your soul. And the Goddess standing beside Him is exquisitely beautiful. 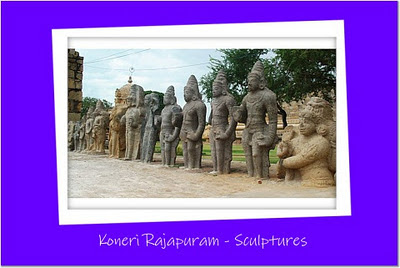 The priest lets you go inside and see the Lord Vaidyanaathaswamy and also some other icons made by the sculptor even till this day.

It is said that many diseases, even cancer is cured by this Lord. There are devotees from far off places like Canada, who have been cured of terminal cancer, by performing Abhishekam or special poojas here. 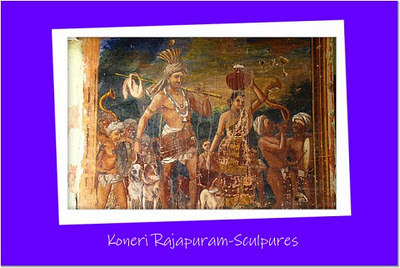 Added Information :
The temple occassionaly does Sama Veda pooja. The temple also does a grand rudra homam which might cost a bit,  but definitely worth it...The said Homam is believed to help us get rid of all our sins.


I am sure after getting to know of this beautiful temple, people who needs to reach out this Divine Lord may do so. One should have complete faith in Him. The Priest in the temple is a very involved person and does all the Poojas with great devotion. It is a very beautiful temple with many sannidhis and has a rich history behind.
There is also a Perumal Temple in the Agraharam with a Sannidhi for Shree Rama. The Perumal is known as the Koneri Raja.

HAVE FAITH......EXPERIENCE THE IMPOSSIBLE AT THIS TEMPLE.