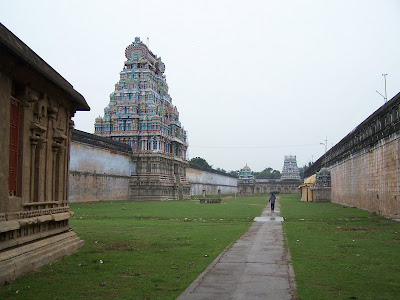 Thiruvarur is located at a distance of 55 Km from Thanjavur. The principal deity in this temple is Sri Vanmikanathar, a Swayambu Lingam, enshrined in an ant-hill. His consort is Somakulambigai. She is never taken out of the temple precincts. To the right of the sanctum is the shrine of Sri Thyagaraja.
The Thyagaraja idol [Veedhi Vidangar] and that of His consort Kondi, sitting on an artisitc Ratna Simhasanam is very impressive. The Processional Deity is known to perform "Asaba Natanam". The Saptha Lingam is kept in a golden box inside the shrine. The Nandhi is in standing posture.
One can also find the images of Saint Sundarar, His wife Paravai Nachiyar and Cheraman Peruman installed in this temple.
Navagrahas are placed in a row, opposite to the sanctum, in a shrine. The Rudra Durga shrine, in the second prakaram, attracts a large number of devotees, for the Rahukala Puja, in particular.
The Sthala Vinayaka in the innermost prakaram is called Vathapi Ganapathi, which has been brought from Vathapi.
The image of Goddess Nilothpalambika, in a standing posture, is in a separate shrine. She is depicted as Blessing the child,Muruga , with Her left hand. There is an inscription and sculptural representation of the story of King Manu Neethi Chola who ordered his son to be crushed under the wheels of a Ratha or Chariot because he killed a calf by driving his carriage negligently over it. Lord Shiva is said to have intervened and revived the boy and the calf.
Kamalalayam, the much celebrated Tank, is on the western side of the temple and in the middle, is the shrine of Sri Naganathaswamy. Here is a rare musical instrument called "Panchamukha Vadhyam" [with five faces of Shiva], and also a Shiva Lingam made of Sapphire, known as "Maragatha Lingam".
Thiruvarur is the birth place of the Great Musical Trinity, Sri Thyagaraja, Sri Shyama Sastri and Sri Muthuswamy Dikshitar. During the festival, the idol of Sri Thyagaraja, is taken round the streets in a magnificient Ratha called "Azhi Ther"
This is the most important of the Vidangar Temple, and one should not miss to watch the abhishekam to this beautiful lingam. As the milk flows over the translucent green stone, amid the chanting of mantras, even the atheist will feel some kind of attraction which might actually be devotion and faith. The Vidangar abhishekam timings is at 8:30AM and 5:30PM everyday. One can go there an hour earlier and engage a priest. You can see the other deities in the temple and stay for the abhishekam, which takes a few minutes only. This is a unique event and devotees should go early, and, see to it that they do not miss this rare abhishekam.
This is the only temple celebrating ‘Nithya Pradosham’. In all Shiva temples, the Pradosha puja on the specific days during the evening is a special puja, when the lingam is bathed with various materials. Here, this abhishekam takes place everyday at evening during the Pradosham time.
Opposite the temple is a lake with a temple in the centre. Every day, after 5:30PM, the lingam in the temple is worshipped to. From 5PM, a boat service is available to take devotees to this temple.
This is a beautiful temple, worth the money spent and also the efforts taken.

Those who want more infomrmation about this, One Mr.Adiyarkku Nallan done a great job by way of releasing book"Neelothpalam" which is published during Feb.2010

Tks for your comments with regard to my posting on "Saptha Vidanga Sthalams/Temples" and for the added info on the said book published on the above subject.

I am sure those of whom are interested, will definitely be benefited on reading this book.