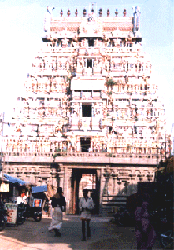 Vedaranyam considered very sacred, second in sanctity only to Rameswaram. The place is very much distinguished on four aspects.
They are:
1] It is one of the seven sacred places of Siva[Saptha Vitanka Sthalams].
2] The main Deity is adored by the three renowned Saiva Saints, out of twelve Thirumurais the Lord is hailed by the Saints in seven Thirumurais.
3] Both the name of the Deity and the name of the town are woven with numerous legendary and mythical stories.
4] The very important incident Salt Sathyagraha during the time of freedom moment took place here only. Hence the place occupies an intelligible identity in the history of modern India.
Vedaranyam is in Nagapattinam District and is 35 Km. South of Thiruthuraipoondi. It is situated in the sea coast of Bay of Bengal. According to the legendary and mythical stories the place is attributed with several names. Such as: – 1.Maraivanam 2.Vedavanam 3.Sathyagiri 4.Aadisethu 5.Thenkailayam 6.Thirumaraikkadu 7.Vedaranyam.
Though the place got various names both in literature and inscriptions, the place is familiarly called as Thirumaikkadu in Tamil and Vedaranyam in Sanskrit.
The Maragatha Lingam enshrined near the Thyagesar shrine is known as "Bhuvanin Vidangar" and His dance is "Hamsa Paada Natanam".

The presiding Deity is attributed with several names.They are: 1.Vedaranyeswarer 2.Vedaranyanaadhar 3.Vedavanesar 4.Maraikatteesar The Deity is in the form of Siva Lingam. Behind the Siva Lingam, a panel adorns the inner side of the back wall of the sanctum. Curiously enough to our surprise, the panel represents Lord Siva and Parvathi in Sukhasana pose sitting with comport. The Deity is called as ‘Maraikkatturayum Manalan' in Tamil, meaning the bridegroom who resides at Vedaranyam. Siva Lingam in front and Lord Siva and Parvathi panel in the back wall of the sanctum, both are simultaneously considered as the principle object of veneration.

Here also a mythical story is narrated. To see the Divine marriage (Thirukalyanam) of Siva and Parvathi at Kailasam, the Devas, Rishis and other celestial beings went towards north.It is said that, when all of them went towards north, the northern part of the earth slopped down and the southern part went upwards. The Whole earth was in confusion.At that moment, knowing about the chaotic condition of the earth, Lord Siva asked the Rishi Agasthiar to travel and go towards south. To one's astonishment the earth automatically came to a balance and both sides became equal. But Agasthiar was not happy because he missed to see the Divine marriage. However Lord Siva blessed him that he will witness the Divine marriage in a place at south. He selected Vedaranyam, where the four Vedas worshipped the Lord Siva. Hence to his promise Lord Siva gave special darshan of his marriage with Goddess Parvathi in Vedaranyam. The Divine marriage, which occurred here, is depicted through a panel in the niche of the back wall behind the main Deity Siva Lingam in Sanctum. Here Lord Siva as bridegroom and Goddess Parvathi as bride are portrayed in a sitting posture. In commemoration of this sacred and spiritual incident, every year during the month of Chithirai (April – May) on the Sapthama Thithi, Suklapaksha, when the star is Punarpoosam, the Divine Marriage is celebrated in a grand manner. The Images of the Divine couple are consecrated (Thirumanjanam) at noon.

After this sacred bath, sandal paste is applied fully to both the idols and that will remain in tact throughout the year. It will be removed only the next year when the marriage ceremony is performed in the temple. Hence the Deity is familiarly called as ‘Maraikkatturaiyum Manalar'which means the Bridegroom who resides at Vedaranyam.

For the Goddess, there is a separate shrine in the eastern side of the main shrine. She is known as Veenavada Vidhusini in Sanskrit and Yazhaipazhithamozhiyal in Tamil, meaning that one who challenged the melody of the veena of Goddess Saraswathi. This name is attributed to her because her voice is said to be so musical, melodious and pleasant to the ears even that of the melody of the Veena. Here it is interesting to note that the image of Goddess Saraswathi in side of the temple is seen without Veena but with a palm leaf in her hand in a yogic posture. Goddess of Vedaranyam is one of the Sakthi Peeta Sthalams. 1. As usually seen in other Saptha Vitanka Sthalams, the Navagrahas are seen in one row all facing the same direction. But here the Grahas are seen in sitting posture as per the day order. They are situated in the outer Corridor. 2. There is a separate shrine for Saneeswara (Saturn) in the inner Prakara. In the same Prakara there are two images, one is Surya and the other is Chandra. 3. In the outer Prakara we come across the Idol of Goddess Saraswathi, but is seen without Veena. She is in Yogic posture with Japamala in one hand and Palmleaf in other hand. 4. The Sthala Vinayakar is Veerahathi Vinayakar.There is a separate shrine in the outer Prakaram near the western Gopuram. He is also known as Chinthamani Ganapathi.A bronze idol which is considered as the processional idol and is familiarly called as Katchikodutha Nayanar.

5. The Goddess Durga is another famous deity of the place. She is considered to be the guarding deity facing south side in a Thribhangi posture.

In this temple, for the Vidangar[Bhuvani Vidangar], the abhishekam is performed at 8:30 AM and 6:30PM everyday. Festivals on Full Moon day in Adi [uly/Aug] and Thai [Jan/Feb] attract a number of devotees.

If you happen to visit Vedaranyam, a visit to Kodikkarai will be ideal as this is the easternmost point of our country, also known as Point Calimere, 11 Kms from Vedaranyam. The sea is absolutely wonderful, and one must experience going on a boat ride; It will be a wonderful experience indeed, with the beach so full of sea-shells!!. There is also a bird and deer sanctuary nearby the beach which will add flavour to your visit. Vedaranyam is a place not to be missed.
Posted by Jolly R at 2:45 AM