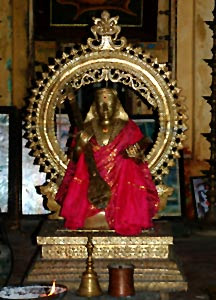 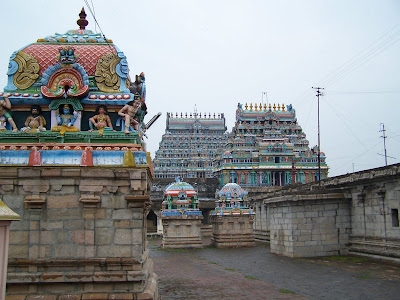 It is time now to go to the next set of Temples/Sthalams. In the following posts of mine, I will be writing on the Saptha Vidanga Sthalams/ Temples which are mainly in Thanjavur, Tamilnadu.

A brief note of the Vidanga Murtis':

Vidanga Murti's are worshipped in seven temples, known as Saptha Vidanga Sthalams, located in and around Thanjavur, Tamilnadu. The main deity for worship in these temples is "Thyagaraja or Somaskanda Murti". Each of these Murti's has a special name attached to it and is known to perform a unique "dance" during processions.

Lengend says that the Chola King by name Muchukunda Chakravarthi was a great and valorous king. He was once approached by Indra for help during the war between Devas and Asuras. Muchukunda gladly agreed to help the lord of the Devas, and joined in the war. Finally, with Muchukunda’s aid, the Devas succeeded in routing the Asuras, and Indra was extremely grateful to the king. He offered the king a gift of his choice, and Muchukunda, a devout man, asked for the lingam worshipped by Indra. Indra was stunned. He did not want to part with his precious lingam, but the king wouldn’t accept anything else. He finally decided on a deception, and showed Muchukunda seven lingams and asked him to choose the one he wanted. Muchukunda was a smart king, and prayed to Shiva to identify the correct lingam. Shiva was pleased and helped him identify the original lingam prayed to by Indra. Indra was so impressed by this that he gifted all the seven lingams to the king. Muchukunda returned to earth with the seven lingams and installed them at various places in his kingdom. The original one he kept at the temple at Thiruvarur, and the others at Thirunallar, Vedaranyam, Thiruvaimur, Thrirukaravasal, Thirukkuvalai and Nagapattinam. These seven temples are collectively known as Saptha Vidanga Sthalams.

Vidanga means something that has not been chiseled out. These seven lingams are believed to be divine – not made by chisels. Normally, it is the top portion of the lingam – the ellipse which is believed to be swayambhu. The base – avudayar- is made by hand. In all these seven lingams, the whole lingam – the base as well as the top portion – form a single piece, and are believed to have appeared just the same way, without being made, and hence the name. All the seven lingams are of different sizes, though they are made of the same material called maragatham or emerald. However, it looks more like Jade than emerald, as it is translucent. The biggest one is at Thirunallar, while the one at Thiruvarur is of medium size. However, it must be mentioned that these two are the only two of the original lingams left. One is not too sure of the originality of the 5 other lingams, because at 2 temples, it is said that the originals had been stolen ages ago, and the lingams presently there had been installed by saints in their place. At one temple, the new lingam was to be installed the next month. The two lingams at Thiruvarur and Thirunallar are however worth a trip.

An interesting thing about all these temples is that the Vidangar is believed to rule over all the planets, and the Navagrahas are seen in a single file facing the lingam.

The first of the Saptha Vidanga Sthalams/Temples will be on "Thiruvarur in Tanjavur District,TN.....