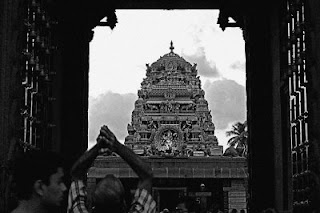 Legend has it that Goddess Parvathi , the divine consort of Lord Shiva , did penance at Mylapore taking the form of a pea-hen, in order to be wedded to him. The name Mylapore is derived from this legend - "Mayil" in Tamil means a peacock. The famous Kapaleeswarar temple in Mylapore and its beautiful temple tank are associated with this legend.


The renowned geographer Ptolemy had described about in his writings about the Mylapore and the famous Kapaleeshwarar temple . The temple boasts of exquisitive architecture and one of the most celebrated shrine of Lord Shiva and goddess Parvati. 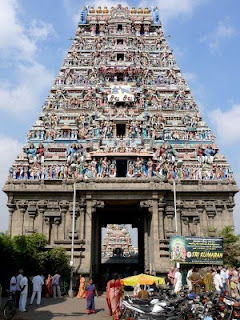 The Kapaleeshwarar temple is one of the most important temples in the world. The temple has statues of all the Gods and Goddesses of the Hindu Religion. Built in the 9th century this temple stands as one of the most foremost temples of South India and remains a testimonial to the greatness and unflinching devotion of the Pallava kings.


Literary evidence in innumerable songs and hymns, reveal the existence of Mylapore Kapaleeswarar Temple many centuries before Christ. Historical accounts clearly indicate that Tiruvalluvar and Peyalwar lived in Mylapore which adds glory to this holy place.


The present Kapaleeswarar temple was built 300-400 years ago at a different location as detailed below. 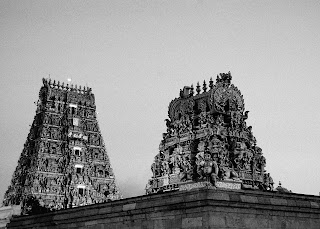 Mylapore was a well known sea port and trade centre even before 2000 years. St. Thomas, one of the twelve apostles of Christ visited this place in 2nd Century A.D. PTOLEMY, the Greek Geographer has mentioned it as "MALEARBHA" Original temple was at Sea-shore the place of which is now called Santhome Cathedral. The temple suffered demolition in 16th Century when Mylapore was captured by Portugese in 1566 A.D. 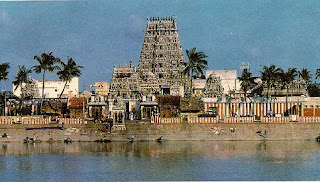 The temple surrounded by the four 'Mada Streets' and abutted by the 'Temple Tank' is a spot that cannot be neglected by any tourist to Chennai, whether Indian or Foreign. 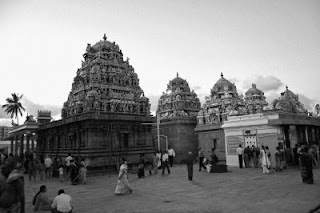 The temple has other shrines dedicated to Ganesha (a dancing form called Nardana Vinayakar), Muruga (called Singara Velar), with his two consorts Valli and Devayani . Smaller shrines are dedicated to other forms of Shiva (Annamalaiar, Sundareswarar and Jagatheswarar), Muruga (Palani Andavar) and others. In particular, there is a shrine with an image of a peahen, which is where Mylapore derives its name from. Navagraha shrine is also present. There is a separate shrine for Sani Bhagavan and special puja's will be done on Saturday.

Innumerable festivals like Daily festival, Weekly festival, Monthly festival, Nayanmars birthstar festival.are performed. No day is passed without a festival. Elaborate arrangements are made according to the nature of festival. Apart from these routine festivals, the following grand festivals are of great divine attractions even today.


Thirugnana Sambandar in his hymns written centuries ago says that these festivals were a hoary traditions in the repertoire of festivals at the ancient town Mylapore. 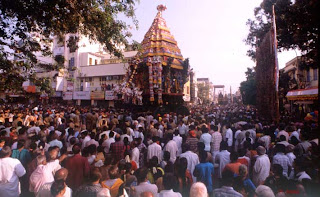 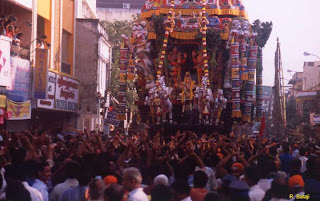 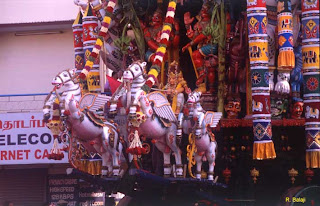 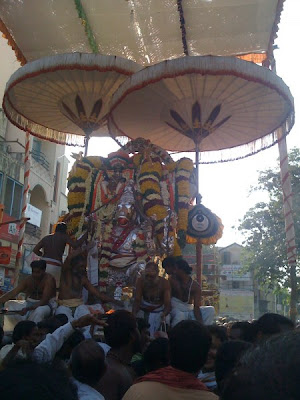 This is celebrated in the month of Panguni [March - April]. It lasts for 10 days. 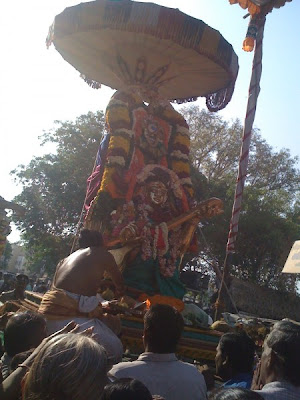 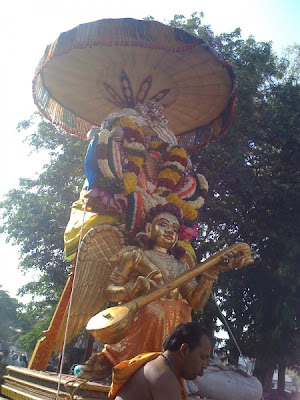 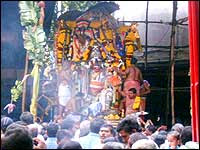 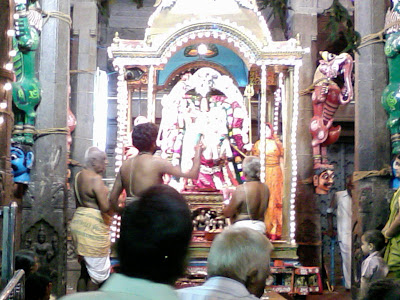 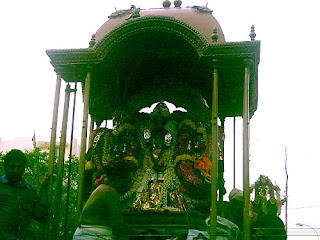 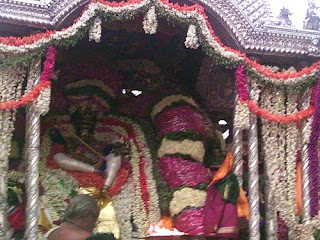 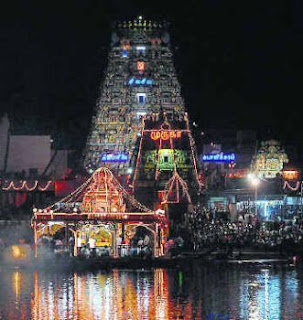 In Tamil it is called Theppa Thiruvizha
It takes place in the month of Thai [Jan-Feb]
The deities are taken in a decorated raft called "Theppam" in the tank. The tank is colorfully illuminated all around. 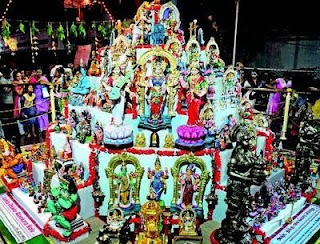 This is celebrated for 9days. That is why it is called Navarathiri festival.
It starts from next day of Newmoon day in the month of Purattasi [Aug - Sept]
Prayers for first 3days are for Goddess Paravathi for next 3days for Goddess Lakshmi and the last 3days for Goddess Saraswathi.


10th Day : Vijaya Dhasami is celebrated in a grand manner.

This summer festival takes place in Vaikasi (May-June) Music programmes are arranged during this festival.


Miracles Associated With This Temple 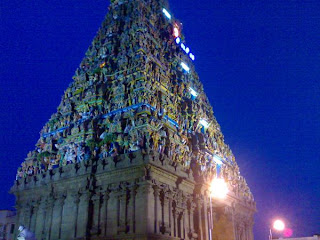 The life history of Poompavai is a great miracle. She was the daughter of a merchant called Sivanesan Chettiar. When she was gathering flowers in the garden, she was stung by a snake and she died. Sivanesan Chettiar kept her ashes in a pot with strong faith that Thirugnana Sambandar, a famous saint would resurrect her. Sambandar Came to Thiruvottiyur on his pilgrimage. He was invited to Mylapore temple with a spectacular welcome.


The saint did not cast even a glance at the beautiful damsel he brought to life. He was so humble to realise that the miracle was not his power, but only the grace of God only. Sivanesam requested the saint to take his daughter in marriage but Sambandar gently declined and went away. 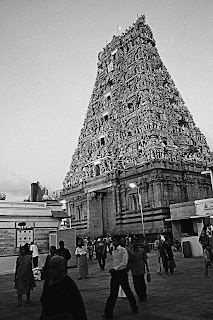 1.   Sri Rama on his return from Srilanka after killing Ravana perform pooja to Lord Siva at Rameswaram to wash off his sin of killing Ravana.


2.   Then he came to Mylapore and performed Brahmothsava (great festival) for Kapaleeswara in the asterism Thiruvonam.


3.   But there is no evidence of any sculpture or freize in the present re - built temple to support this legend. 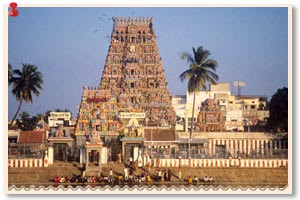 Surely a beautiful temple to visit in Mylapore.

With this, my postings on Saptha Sthana Sthalams/Temples comes to a close.  My next posting on Temples will follow shortly.
Posted by Jolly R at 4:51 AM

Hi! You have a nice blog.

I was curious about which temple is portrayed in the title picture of your blog.

Tks for your comments. Yes...many other people have also sent in their comments appreciating my Blog. This ofcourse inspires me to give my best!

The Temple I have portrayed as the title picture is that of the Brihadisvara Temple. As you know, this is one of the Architectural wonders of cultural India. Built between 985AD - 1012AD by king Raja Raja Chozhan of the Chola Dynasty, this magnificent temple today stands in the heart of Thanjavur City, in the southern state of Tamil Nadu, India.

This is a great example of Geological, Astronomical, Architectural, Cultural and Technological developments made by India prior to British Invasion.

Kapaleeswarar Temple is a well known landmark located in the heart of Mylapore and is visited by several thousands, especially during the famed ‘Arupattu Moovar‘ festival in the month of Pisces. The Teppam or float festival in the large temple tank, and the biweekly Pradosham festival also draw huge crowds. It is also called by locals as karpagambal temple. The 1,300 years old temple have won an ISO certificate for being the Best Maintained and Administered Temple in the State.