One of the most prominent among the Non Divya Desams is the Madhava Perumal Koil in Mayurapuri [now Mylapore] in the heart of Madras[now called Chennai. The temple that has a rich history attached to it is said to be at least 800 years old, though there are views that this temple may have existed around the time of the Azhvaars or just after.


Another indication that this temple is really several centuries old is the four pillar mandapam in front of the temple, typical of some of the Pallava construction of that time. It can be seen that the most traditional and historical of temples, dedicated to Lord Vishnu, have the four pillared structure in front of the temple and such temples are said to be at least about 500-600 years old.

A Prarthana Sthalam for unmarried people and childless couples 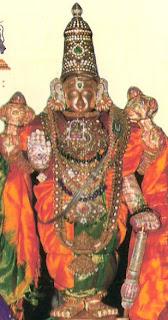 TWO ANCIENT temples dedicated to Lord Narayana with the two sacred names Madhava and Kesava are lying in the heart of Chennai in Mylapore.


According to Mayurapuri Mahadhmiyam in the Brahmandapuranam, when Sage Vyasa requested the Lord to show him the holiest of places where he could do penance, He pointed out to Madhavapuram [Mylapore]where Sage Bhrigu had earlier set up a hermitage and did penance.

It was very near the holy water source known as Santhana Pushkarani where all holy rivers merged on the Masi Makam day. Those who bathed in it on that day would get all their wishes fulfilled, the Lord said. To add to the holiness of the place was the fact that Peyazhwar, the last of the three saintly men hailed as "Mudhalazhwargal," was born in a 60-feet deep well known as Manikairavam, to the south-east of the temple, which exists to this day in Arundale Street, though in a neglected condition.

While the other two Azhwars lit the lamps with the help of earth, sea and sun [Poigaiyar] with love, eagerness and thought [Bhuthathar], Peyazhwar was able to see with the help of the lights lit by the other two, "Thiru" (Mahalakshmi) first and the Lord next. The temple of Madhava Perumal is said to be very ancient, though its history is traced back to only 800 years from now, according to available records. The temple faces east with a five-tier Rajagopuram at its entrance, which was renovated and consecrated 40 years ago. Two more Samprokshanams were performed in the last 40 years, once in 1977 and again in 1992. The presiding deity in the sanctum sanctorum is in a sitting posture along with Sridevi and Bhoodevi. The Lord is hailed as Kalyana Madhavan as He married Goddess Amritavalli, who was born as Sage Bhrigu's daughter here.

The temple, according to legend, is situated in the place where the sage set up his ashram.

Though the Lord in similar posture in other places and is called "Paramapadanathan" holding the Sudarsana, Panchajanya and Gadhayutha in His three hands with the fourth one in "Abhaya Hastha" pose, the Lord's idol here has no Gadhayutha. The Utsavar [processional idol] is also called "Kalyana Madhavar" and He is in standing posture with Sridevi and Bhoodevi on either side. There is a separate shrine for Goddess Amritavalli to the right of the sanctum sanctorum and Her "Thirukkalyanam" with the Lord is celebrated on the Panguni Uthiram day.


One of the first three Azhvaars, PeyAzhvaar, was born in a street South East of the Madhava Perumal temple. Reference to this is found in the Brahammanda Puranam in the section relating to Mayurapuri Mahaatmiyam.


It is believed that Lord Vishnu came here from his abode in Vaikuntam as Madhava Perumal to marry Amruthavalli Thaayar. Hence, this place came to be called Madhavapuram.


The temple which was supposedly in a dilapidated condition in the early part of last century is said to have been revived to its old glory by the Chettiars, about 50-60 years ago, who installed the Utsava deities that one sees today. 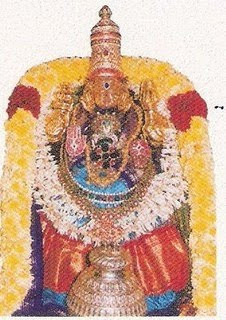 
Santhana Pushkarani, which is now found to the South of the temple was the sacred tank of Sage Brigu, who lived in the ashram here. The age old belief, as referred to in Mayurapuri Mahaatmiyam, is that couples who bathe here on the full moon day in the Tamil calendar month of Maasi (mid Feb-mid March) and who offer their prayers to Madhava Perumal and Amruthavalli Thaayar will be immediately blessed with children.

There is also a Prarthana Sthalam for unmarried people. Offering prayers to Lord Madhava Perumal who is seen in Kalyana Kolam is said to help one find his or her match immediately.


There is a separate shrine for Andal, but Her Utsava idol is kept in the Lord's sanctum sanctorum. Her Thiruppavai songs have been inscribed on the walls of the shrine. Very near the Paramapada Vasal is the Kodanda Ramar shrine where along with Him Sita, Lakshmana and Anjaneya are worshipped. The idol of Lord Bhuvaraha, with His consort sitting on His left lap in a separate shrine on the banks of the Pushkarani, is a thing of beauty to watch and worship forever.

The devotees consider Mundagakkanni [Lotus-eyed Goddess] Amman worshipped in a separate temple very near the Madhava Perumal temple as "Yoga Maya" who was born as the sister of the Lord during His incarnation as Krishna. 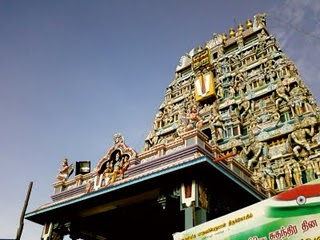 The Vimanam in the temple, like the one in Tirumala [Tirupati], is known as "Ananda Nilaya Vimanam." Rituals are performed according to the Vaikhanasa Agama. With the Kalyana Mandapam, Alankara Mandapam and "Palliyarai" the temple is an imposing structure in this part of the city.


Under the control of the HR and CE Department, it is well maintained. Festivals are held in almost every Tamil month, except Ani and Purattasi, with the Brahmotsavam being celebrated in Chithirai and Peyazhwar Avatara Utsavam in Aippasi.

In the Tamil calendar month of Aadi, Lord Madhava Perumal is seen in a sleeping posture on the lap of Andal- a special event at this temple.


Andal makes passing reference to Madhava Perumal in her Thiruppavai…

On the western side of the temple is the Bhoo Varahar sannidhi. A special homam is performed in February every year ahead of the final exams of students…It is believed that Varahar helps student devotees come out successfully in their examinations.


One of the special features at the Madhava Perumal Koil is the 9 day festival during Panguni when Rama is brought to life with special decorations every day relating to different events/episodes in his life.