The Kalikambal Temple is a Hindu temple dedicated to Kalikambal [Kamakshi] and Kamateswarar.  The temple is located in Thambu Chetty Street, George Town area , which is a prominent financial centre of Chennai, India.


History
The temple was originally located closer to the sea shore, and was relocated to the current site at 1640 AD . The great Maratha  ruler Shivaji  had worshipped in this temple during October, 1667. It is believed that a fierce form of Goddess was held in worship earlier and that this form was replaced with the shanta swaroopa form of Kamakshi. 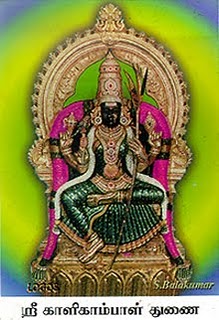 I frequent this temple whenever I get the time and it definitely gives one lot of satisfaction especially after having had a good darshan of Goddess Kalikambal.