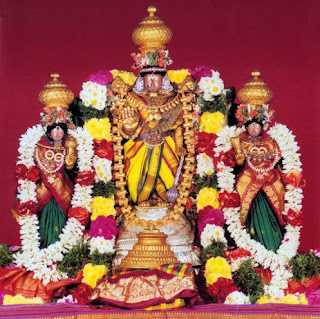 Thiruvidandai" [ திருவிடந்தை] is one of 108 Divya Desam.  It is near Chennai around 40 km. It is Varaha Kshetram. It is famous for marriages.

The temple was built by Pallavas.  It is near Seashore. It has a large temple tank in front of the temple. It is quite an old temple. There is a separate shrine for Komalavalli Nachiyar. The Lord here stands on Adisesha and holds his consort on his left side. There is also separate shrine for Andal.   The Temple follows Thenacharya Sampradayam.

Sage Gavalaa Maharishi had 360 daughters. He was very much worried to get them married. He prayed to Lord Vishnu.  The Lord who resides here promised the sage that he would marry one daughter a day and married all the 360 in a year. So the Lord here is called as 'Nithya Kalyana Perumal'. It is also told that Lord then immediately converted all the daughters into one and kept on left lap. Hence the name is called "ThiruVidandai".

Sage Markandeya  and King Mahabali had visited the kshetram. Even today many pilgrims come here and get the blessings of Lord Nithyakalyana Perumal. Those who wants to get married would be offering two garlands to Lord. After Puja, the priest would give one of the garlands. The person should wear that garland and do Pradakshinam. This is practiced, so that marriage would be fixed soon to the bhaktas. 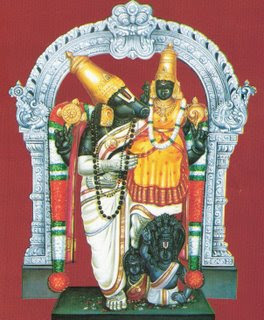 The Annual Brahmotsavam will be conducted during Chittirai Month. Garuda Seva is held during the months of Aani, Aadi, Masi and Thai.

Thirumangai Alzhwar has sung is praise of Lord Nithyakalyana Perumal.The temple is more or less at least 1000 years old and it is believed to be built by Chola kings. The temple is not very huge but very beautiful.

Paasuram to be sung in praise of the Lord


There are many hotels at Chennai  and also bus facility available from Tiruvanmiyur  to Nithyakalyanar  Peruma Temple.