Sri Kamakshi Amman stands in all Her Glory - amidst the paddy fields in the small village of Kunniyur and 48 days of the Mandala Puja proceedings reached it's climax...

...and it was time for the Temple Committee members to be on their feet again.  Elaborate arrangements had been made for this grand finale....and I should say that our visit to this religious function was worth every minute!

It was the final two days of the Mandala Abhishekam of Sri Kamakshi Amman of Kunniyur in Mannargudi, Thiruvarur District of Thanjavur.
The Mahakumabhishekam of the temple was performed on January 29, 2012, in a grand manner.

The Mandalabhishekam and Homam of the newly  consecrated temple of Sri Kamakshi Amman in Kunniyur, Manargudi in Tanjavur District,  was performed on Saturday the 17-03-2012,  bringing the 48-day rituals to an glorious end!

It was a direct contrast to the climatic conditions which one experienced at the Mahakumbabhishekam period.  The beginning of the hot summer months ahead were clearly visible and  inspite of the sweltering heat generated all over the village, there was a huge gathering and I should mention here that there was that "gentle Breeze" --brushing past all the devotees amidst the greenery of this beautiful, calm village called ----" Kunniyur - the Abode of Kamakshi".

It seemed as if "Kamakshi Amman beckoned" all of her devotees from far and near to the village of Kunniyur, to see Her and get Her Blessings on that day!

It is no doubt  the "Power of Kamakshi Amman"... luring all Her devotees to Her side to be showered with Her Blessing!

On the morning of 16-03-2012, the temple wore a festive look and was full of activity with lots of devotees waiting to take part in the 'ஏக தின லக்ஷார்ச்சனை'[ Ekadina Laksharchana] which began at around 8 am and went on to 1 pm and 3 pm to 8.30 pm - rendering the air with their vibrant chanting of the Sahasranamamarchana.  This was followed by Deepaaradhanai and distribution of Prasaadam.

The Mandala Puja indicates  the finishing of the Maha Kumbabishekam. One Mandalam denotes 48 days, hence after 48 days, this puja is performed.

On the final two days of the Mandala Abhishekam of Sri Kamakshi Amman of Kunniyur in Mannargudi, Thiruvarur District of Thanjavur,  this small village came to life once again and the whole atmosphere was vibrant to the chanting of the Mantras by the Prohits who had come from far and near for this auspicious occassion.  All of the rituals like the Mandalabhisheka Poorthi Homam, Special Abhishekam, Alangaram, Neivedyam, Dheepaarathanai, Prasaadam  distribution were done in a perfect manner in accordance to the Aagama sastras and Prasadam distribution and Annadhaanam [free food distribution] brought down the curtain to this grand ritual of great significance.

Occurring on the forty-eighth day after consecration of the murti  in the temple, all the religious norms like the Tattvakala-homa was performed in accordance with the scriptures by the temple purohitas and Purnahuti of the Homam at about 11.30 am, was conducted in the august presence of the Pannaiyar family, along with all the other devotees of Kunniyur, gathered for this two day function in the newly constructed /renovated temple of Sri Kamakshi Amman.  After purnahuti,  the Mandalabhishekam was performed to the Amman, accompanied by the sonorous chanting of Vedic mantras by the Sivacharyar, Purohitas and Pandits.  More than 15 to 20 priests had gathered to perform the Vedic and Agamic rites in an authentic and befitting manner.... a fitting climax to the religious ceremonies.

Sri Kamakshi Amman  stood in all Her splendour and accepted our offerings which was indeed a sight to be-hold!

As expected, there was a large gathering on these two concluding days of the Mandalabhishekam.  The Sivachariar  and the Prohitas who performed the Pooja found the whole proceedings to their utmost satisfaction and each and everyone gathered there felt that the Mandalabhishekam was"uthamathula uthamam", i.e. within the grand category itself it was grand!

What a memorable moment for the Kunniyurians!  This event is sure to be etched in each and everyone's mind for many more years to come...!! 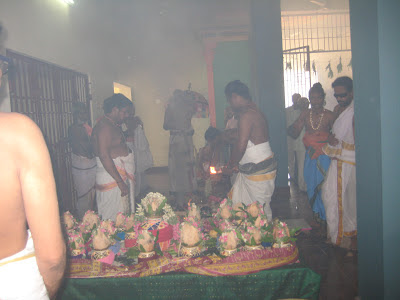 Homas, ordained in the Aagama sastras, to be performed during this time,  are performed with due ritualistic care and attention.  Poornahuti and Mahaa Deepaaaradhana are performed at the end of the proceedings.  At the conclusion of the ceremony the power secured by the performance of the various Homas are transferred to the main homakunda. Thereafter, rituals follow to transfer the divine power accumulated in the main homakunda to the main kalasa installed at the center of the Yaagasala.  The sacred fire of the Homakunda is extinguished thereafter.  Elaborate poojas are conducted to kalasaas to energize the same with all the power.  The highlight of this process is bathing of the Vimaana [steeple] and all the deities from the water of the kalasaas, by the priests.  The Aacharyas are the center of attraction chanting the mantras in all earnest.

Mahadeepa Aradhana to the sanctified deities after the kumbhabhishekam, and performing Shodashopachara [sixteen steps] Pooja is a memorable sight.  Theertham, Prasadam distribution and Annadhaanam [free food distribution] bring down the curtain to the grand ritual of great significance.

Traditionally, the Kumbabhishekam ceremony is followed by special poojas for the benefit of society and mankind as a whole. Accordingly, on the evening of this ceremony Kalyana utsavam [marriage ceremonies] are performed followed by taking the deities in a procession.  According to the Aagama sastras that guide temple rituals “Mandala Abhishekam” must be performed for over a month [normally 48 days] after the completion of the Mahaa-Samprokshanam  or Maha Kumbabhishekam.

The Mandala pooja enhances the divine presence in the consecrated [recharge] archana and moola [main] vigrahaas.

Kumbhabhishekam ceremony has everlasting effect on the society as a whole, besides on devotees.

It is conducted with the sole purpose of eradicating all illness, obtaining good benefits from various Yagaas, deriving rich benefits for the well being and for the healthy propagation of the progeny. The kumbhabhishekam brings all-round prosperity not only to any particular group or devotees but also to the society as a whole. As we all know Sanatana Dharma postulates  "Vasudheka kutumbakam‟ the whole world is one family and

"Eko vipraha Bahuda vadanti", wise men call the ONE [Supreme] by many names and forms.

Food and accommodation arrangements were excellent and worth mentioning.

There was  excellent support and co-operation extended to and by the  KBSS Thiruppani Committee, in making the Mahakumbabhishekam and the Mandalabishega Poorthi Vaibhavam of Sri Kamakshi Amman a memorable one.  All of the devotees, old and new to our temple, as well as the founders and trustees found the whole event to be a magnificent one and  conducted in a grand manner.  Each one  of them had a word of praise and of course complimented the way it was organized and the contributions of the volunteers - - most satisfying.

It was all the more gratifying to hear such comments about the ceremony.

Kudos to the Pannaiyar Family and also to the entire team of K.B.S.S. Committee, for making this event a grand success once again!!

Please click on the below link learn more about the Sri Kamakshi Amman of Kunniyur.....

May Sri Kamakshi Amman's Blessings be showered upon all of us!

You may view a few pictures taken by us at the above Mandalabhishekam function below: 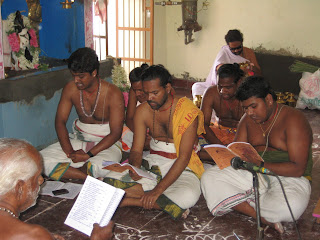