The Baijnath temple in Himachal Pradesh is a 13th century temple dedicated to Siva as Vaidyanath, ‘the Lord of physicians’. It is situated in the foothills of Dhauladhars on Pathankot-Mandi highway. The two long inscriptions in the porch of the temple indicate that a temple of Siva existed on the spot even before the present one was constructed. The present temple is a beautiful example of the early medieval north Indian temple architecture known as Nagara style of temples. The Svayambhu form of Sivalinga is enshrined in the sanctum of the temple that has five projections on each side and is surmounted with a tall curvilinear Shikhara.

The present temple is a beautiful example of the early medieval north Indian temple architecture known as Nagara style of temples. The Svayambhu form of Sivalinga is enshrined in the sanctum of the temple that has five projections on each side and is surmounted with a tall curvilinear Shikhara.

Baijnath Temple is a revered shrine of Himachal Pradesh. Located at a distance of 16 kms from Palampur in the Beas valley, Baijnath Temple is dedicated to Lord Shiva. According to the inscriptions on the walls, Baijnath Mandir was built by the two native merchants by the name of Ahuka and Manyuka in 1204 A.D

The structure of this temple gives the hints of the early medieval North Indian style of architecture. This type of structure used to be known as 'Nagara' style of temple. The architectural style has been imbibed from Orissan style, which is very much unique in the state of Himachal Pradesh. The exterior walls of the temple have numerous alcoves with images of gods and Goddesses from the Hindu pantheon.

In order to enter the temple, one has to cross the vestibule that has a large 'Mandap' in the centre and two huge balconies on either side.

The temple has fortifications, leaving space for two entrances in the north and the south. Just before the Mandapa, there is small porch placed on four columns. Here, a huge image of Nandi [the bull of Lord Shiva] is placed. The door leading to the sanctum is speckled with many images of artistic nature.

The Bells inside the temple add more ornamental as well as architectural beauty to the temple structure. It is a real treat to the eyes as well as the ears to hear them clanging!

The water of this temple is believed to contain medicinal properties, which can cure diseases of people. The water is crystal clear and there are lots of fish that abound. One can feed fish in this temple.


Due to this reason too, Baijnath Temple receives thousands of people every year. Shivratri is the major festival that is observed at this temple with full gusto and fervor. Devotees visit the temple during this time to seek the blessings from the God.


Besides the shrine of Lord Shiva, there are many other small shrines dedicated to Gods and Goddesses. In the early 20th century, the temple was suffered from an earthquake. Raja Sansar Chand made an effort to renovate the temple after the calamity. The temple complex acquires lush green gardens, which makes a perfect foreground to the ancient and unique structure of this temple. Baijnath temple is considered as a part of Indian Heritage, so security arrangements are made here to avoid any unwanted element.

Religious/mythical legends of the temple
It is believed that the King of Lanka, Ravana had worshipped Lord Shiva in the main Baijnath Temple. He sacrificed his head ten times at a place marked out in the temple. And because of this, the people here do not consider it right to celebrate Dussehra which remembers the day when Lord Rama killed Ravana.

The people here think that celebrating Dussehra can offend Lord Shiva a lot. In the past too, whenever any attempt has been made to celebrate the festival, the organiser died within years. Though the fact is that the deaths were in no way related to the celebration of Dussehra, the people here linked the two. Currently plans are again on to start the celebration of Dussehra in a nearby stadium.
Another mythical tale or the truth?
As per another legend Ravana, the king of Lanka, pleased Lord Shiva by his devotion and as a boon asked Lord Siva to live in Lanka for all times. Lord Shiva was pleased in return he gave a large Lilngam to Ravana and asked him to carry it to Lanka, without ever putting it on the ground till he reaches Lanka, otherwise Lord Shiva would settle at the place where the Lingam is put! Ecstatic at taking Shiva to Lanka, Ravana started the journey home. The folklore says that at Baijnath, Ravana suddenly had an urge for a natural call and he handed the lingam over to an old Brahmin directing him not to put the Lingam on the ground. But when he returned, he found the Lingam on ground and hard though he tried, he was not able to extricate the lingam from the ground and there it has been ever since.
Grandeur of an enriching Sculptural facade
The temple has four doors and four ‘dwarpals’ stand guard on these doors. There are many idols of various gods and goddesses, in different postures, in the temple. The six-armed statue of Ganesha is incredible! The pillars outside the temple have the ‘Navgrahas’ inscribed on them. The Nandi’s imposing idol, in the outer courtyard, captures attention.

Besides the serene surroundings and salubrious climate of middle range hills of Baijnath, tourists interested in adventure can also enjoy paragliding at nearby [about 10 km] Bir and go for trekking in the region. 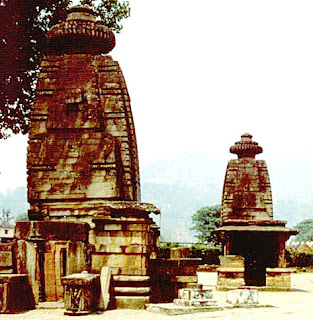 How to get to the Temple:
Baijnath lies on the Pathankot-Chakki-Manali National Highway No. 20, half way between Kangra and Mandi. It is about 130 Km from Pathankot, the nearest broad gauge rail head and airport.