Tantra Temples in India - The Kamakhya Temple in Assam, India 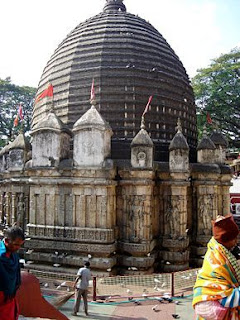 
The Kamakhya Temple in Assam is one of the most venerated Shakti shrines in India, and is regarded as one of the Shakti Peethams associated with the legend of Shiva and Daksha Yagna.


Kamakhya is located on a hill - Neelachala Parvat or Kamagiri near the city of Guwahati in Assam. Shakti, residing on theKamagiri hill is known as Kamakhya, the granter of desires. Assam traditionally has been known as the Kamarupa Desa and has been associated with Tantric practices and Shakti worship.


This temple was destroyed in early 16th century, and then rebuilt in the 17th century by King Nara Narayana, of Cooch Bihar. Images of the builder and related inscriptions are seen in the temple.


The Kalika Purana, an ancient work in Sanskrit describes Kamakhya as the yielder of all desires, the young bride of Shiva, and the giver of salvation.

Legend says that following the destruction of Daksha's Sacrifice and the Rudra Tandava of Shiva parts of Sati's body fell at several places throughout India, and these places are revered as Shakti peethas. The reproductive organ of Sati, [the Yoni] is said to have fallen here. 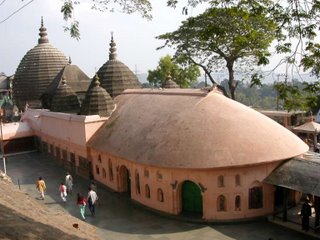 
It is also said that the supreme creative power of Bhrahma was challenged by Shakti, the mother Goddess, and that Bhrahma could thereafter create, only with the blessings of the Yoni, as the sole creative principle. After much penance, Bhrahma brought down a luminous body of light from space and placed it within the Yoni circle, which was created by the Goddess and placed at Kamarupa.


The temple has a beehive like shikhara. Some of the sculptured panels seen here are of interest. There are images of Ganesha, Chamundeswari, dancing fitures etc.

There is no image of Shakti here. Within a corner of a cave in the temple, there is a sculptored image of the Yoni of the Goddess, which is the object of reverence. A natural spring keeps the stone moist.


Other temples on the Neelachala hill include those of Tara, Bhairavi, Bhuvaneswari and Ghantakarna.


Durga Puja is celebrated annually during Navaratri in the month of September- October. It is a three day festival attracting several visitors. A unique festival observed here is the Ambuvaci [Ameti] fertility festival wherein it is believed that the Goddess [mother Earth] undergoes her menstrual period [similar to  Changannur Bhagawati in Kerala]. During this period the temple is closed for three days and opened with great festivity on the fourth day. It is believed to be inauspicious to till the ground or to plant seeds, during this three day period. 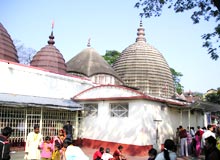 How to Reach the Temple:

By  Air: The nearest airport is Guwahati.
By Rail: The nearest railhead is situated at Guwahati.
By Road:  Guwahati is well connected with regular bus services from all the major cities in and around the state.
Posted by Jolly R at 4:12 AM

Email ThisBlogThis!Share to TwitterShare to FacebookShare to Pinterest
Labels: The Kamakhya Temple in Assam