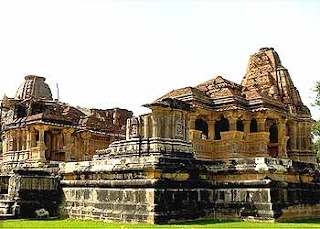 Eklingji Temple is one of the most famous temples of Rajasthan.

Eklingji is located about twelve miles to the North ofUdaipur in Rajasthan. Eklingji [Shiva] whose temple is located here, is said to be the guardian deity of Mewar

Eklingnath Temple is dedicated to the Lord Shiva of the Hindu religion. Initially, the temple was built in 734 A.D. by Bappa Rawal. Since that time, Eklingji has been the ruling deity of Mewar rulers. In the later years, it was repaired and modified by various Kings, to clean the remnants of obliteration made by the attacks of Mohammedans. The Eklingji temple, Rajasthan is devoted to Lord Shiva.

The city of Eklingji or Kailashpuri is located amidst a beautiful valley on the lands of Rajasthan that houses some of the marvelous temples of India.

One of the legends relating to Eklingji is that after killing Vrakshasur, Indra had meditated and prayed to Eklingji in penitance and to get rid of the curse. According to another legend, Bappa Rawal, the founder of Mewar regime, had seen the Shiva lingam in his dream when he was in trouble. When the problems were solved, he approached a sage called Harita Rishi, who advised him to build the temple as a gratitude.

The magnificent architecture of Eklingnath Temple is simply remarkable. The double-storied temple looks awesome with its pyramidal style of roof and distinctly carved tower. The outer walls of the temple are stretched with steps that descend touching the serene waters. Inside the complex, the main temple is a huge pillared hall or 'mandap' that is sheltered by hefty pyramidal roof. On entering this hall, you will be welcomed by a silver image of Nandi. In the temple, there are two other images of Nandi carved in black stone and brass respectively. You would find this temple full of mesmerizing fragrance.

The Shivlinga is encircled by Goddess Parvati, Lord Ganesha and Lord Kartikay. Inside the temple complex, you would find statues of Goddess Saraswati and Goddess Yamuna. The main temple also boasts of heavy silver doors, which depicts Lord Ganesha and Lord Kartikay guarding their father. To the north of Eklingji temple, there are two tanks namely Karz Kund and Tulsi Kund. Water of these tanks is consumed during the services of the Lord. The festival of Shivratri is observed here with full fervor. At this time, the image of Lord Shiva is adorned with jewelry. The entire complex as well as the deities are decorated to make them appear as beautiful as possible. Devotees in large number throng the temple to offer their prayers to the Lord of universe.

The town comprises around 108 small and big temples. Near to Eklingji Temple, you can also trace various temples that are dedicated to Ambika Mata, Kalki and Lord Ganesha. One more temple by the name of Nathon Ka Mandir that dates back to 10th century catches the attraction. Lakulish temple is a fine temple that was built in 971. It is the exclusive temple of the Lakulish sect in India. Sas- Bahu temple is another temple that is all raised in marble of the 11th century. The Jain Temple of Adbhudji is made in black marble which dates back to the 15th century.

The temple is open for the devotees at a little odd hours - from 4.15-6.45 in the morning; next 10.30 am - 1.30 pm and lastly from 5.15 pm to 7.45 pm [you may check the timings timings before any visit to conform changes if any]. Monday is considered immensely auspicious day for devotees as such the crowd on this day can be more than usual.

Amongst other temples of Kailashpuri, temples of Pataleshwar Mahadeo, Arbada Mata, Rathasan Devi and Vindhyavasini Devi are worth mentioning. The wonderful architecture of these temples makes the onlooker to ponder over the artistry of those times.

While planning your trip to Udaipur, Rajasthan,  make sure to include Eklingji in your itinerary. 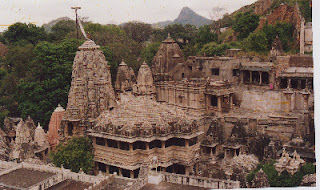 By Air - The Dabok Airport of Udaipur regularly receives direct flights from major cities such as Delhi, Jaipur, Jodhpur and Mumbai. The airport is located at a distance of 25 kms from the city centre

By Rail - Udaipur is served by direct rail links with Delhi, Jaipur, Ahmedabad, Ajmer, Jodhpur and Chittor with the railway station been just 4 kms away from the centre of the city.

By Road - The National Highway 8 links Udaipur to Delhi as well as Mumbai. There are numerous bus playing on this route, that can also connect other regional centres like Agra, Ahmedabad and few other cities of Rajasthan.
Posted by Jolly R at 2:22 AM

Email ThisBlogThis!Share to TwitterShare to FacebookShare to Pinterest
Labels: Eklingji at Kailashpuri - Rajasthan