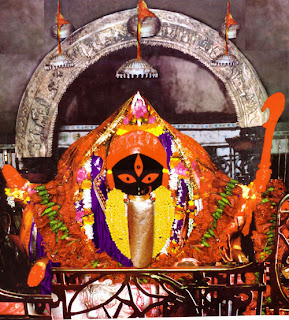 The Kalighat Temple in its present form is only about 200 years old, although it has been referred to in Mansar Bhasan composed in the 15th century, and in Kavi Kankan Chandi of the 17th century.

Only two types of coins of Chandragupta II, who incorporated Vanga in the Gupta Empire, are known from Bengal. His Archer type coins, which became the most popular type of coinage with the Gupta rulers after Kumaragupta I, have been found in Kalighat. This is evidence of the antiquity of the place. 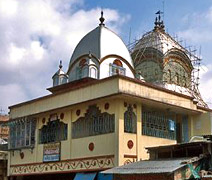 The original temple was a small hut. A small temple was constructed by King Manasingha in the early Sixteenth century. The present temple was erected under the patronage of the Sabarna Roy Chowdhury family of Banisha. It was completed in 1809. The Haldar family claims to be the original owners of the temple property. But this was disputed by the Chowdhrys of Banisha. In the nineteen sixties a committee was formed for the administrative management of the temple with representation from the Government and the Haldar family.
It is necessary to know the history of the temple to understand the practices which are prevalent today. 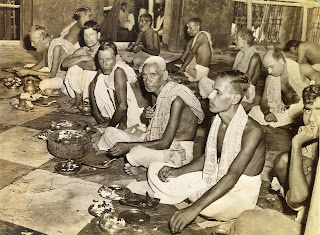 Brahmins worhips in the Kalighat temple Spoon-shaped brass container holds Ganges water. Brahmins are the highest caste of Hindus, their mark of distinction being the piece of string seen in hand of gray-haired senior Brahmin.]

Kalighat, in Calcutta [Kolkata], is an important pilgrimage for tantriks. Goddess Kali is regarded as one of the principal deities of Bengal. She is worshipped as the destroyer or liberator and is depicted in a fearful form. Despite Her terrifying form, She is venerated the world over by devotees as Maa or the Supreme Mother. 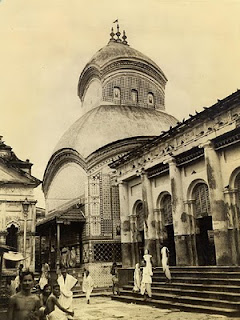 The Kalighat temple in Kolkata is regarded as one of the 51 Shakti Peethas [sanctuaries] of India, where the various parts of Sati's body are said to have fallen in the course of Shiva's Rudra Tandava. Kalighat represents the site where the toes of the right foot of Shakti or Sati fell, as described in Pithamala.

Though no one really knows the genesis of the temple, legend has it that a devotee discovered a luminous ray of light coming from the Bhagirathi river bed, and upon investigating its source, came upon a piece of stone carved in the form of a human toe. He also found a Syayambhu Lingam [self evolved] of Nakuleshwar Bhairav nearby, and started worshipping Kali in the midst of a thick jungle. 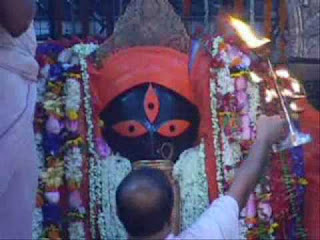 This shrine grew to its present form over a period of time, thanks in particular to Sabarna Roy Chowdhury, a famous Brahmin Zamindar family of Barisa in the district of 24 Parganas. "There are several stories about the temple but no one really knows the truth," says President of Kalighat Temple Committee A K Mittra, also a leading advocate.

According to tradition, on June 22 every year, the Goddess is given Her annual bath. It is a highly private and sanctified event, privy to only a handful of people. The day coincides with the Snan Jatra [bathing ritual] at Jagannath Puri and Kamakhya, another important Shakti Peetha of Maa Kali. On this day the temple is closed to visitors. 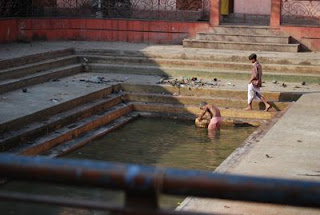 There are five group of Haldars that have been traditionally taking care of the daily puja of Maa Kali. In all, there are about 840 members in the haldar families. Two-three senior members of these families get together to perform the rituals. The event begins at about 3.30 am - the time for the Brahma Muhurta and continues till 1.30 pm. The head priest Shanti Mohan recites the mantras and the haldars bathe the Goddess with the water from the Ganges, perfume, oil [Jabakusum] etc. They paint the body of the Mother with vermillion and dress Her in a Benarasi silk sari bought by members of the Kalighat Temple Committee [KTC]. Below the statue of the deity is a silver box in which the Goddess' toe is preserved. On that day it is opened and bathed. Nobody is allowed to see that.

[Food Offering for the Goddess]

On regular days, the morning puja begins between 4 am and 5 am. And the temple is open from 5 am onwards for public. Around 6.30 am the Goddess is offered fruits and sweets and the afternoon bhog comprises pulao, rice, fish, mutton, fruits and sweets. The food is cooked without tomatoes, onion and garlic in the three dedicated kitchens. Between 6 pm and 7 pm, She is offered traditional Bengali food such as luchi, bhaji, fried brinjals, potatoes and sandesh, and between 10.30 pm and 11 pm, She is given the last bhog of the day, sweets and milk.

Goat sacrifice is a common feature at the temple. "If devotees do not perform a sacrifice, the haldar has to offer a goat to the deity. The first sacrifice has to be given to Her. There's a legend that says that the Goddess visits the Dakhineshwar temple at night and returns to Kalighat in the morning. 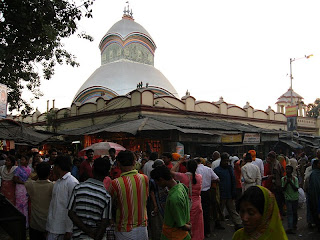 Tuesdays and Saturdays are special days of the Goddess, where people in thousands throng the temple seeking special darshan. The special feature about Kalighat is that there are no tickets and entry is free to all. The temple administration is run in term of scheme passed by the Kolkata High Court, 1957, and thereafter modified by the Supreme Court in 1962-63. The district judge of 24 Paraganas South is the ex-officio chairman of the KTC but because of his judicial functions he has to nominate a senior member of the Bar as the President of KTC. 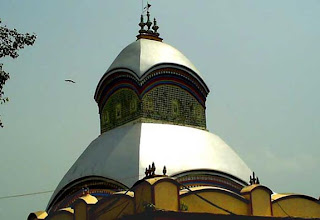 By Rail - Trains are available from all parts of the country to Calcutta. Most inward bound trains stop at Howrah, which is also the station from which major trains to other cities depart. Most trains heading to areas such as New Jalpaiguri and other provinces in the north-east stop at the other station, Sealdah. Local trains to nearby towns are available from both stations, depending on which part of West Bengal you want to go to. Since Howrah and Sealdah are not exactly a hop, skip and jump away from each other, do remember to check which station you need you board your train from, when you buy your ticket!

By Road - A few buses ply from Orissa and Bihar to Calcutta. However, these are highly uncomfortable and best avoided. Buses are also available to nearby towns, especially if you wish to visit Siliguri and New Jalpaiguri on your trip to Calcutta. Depending on which direction you're heading in, buses could depart from the end of the Maidan near Chowringhee Road, or the bus stand at Babu Ghat near Fort William. A few tour operators have their own private bus stands.  So in case you plan to make this trip, do

Email ThisBlogThis!Share to TwitterShare to FacebookShare to Pinterest
Labels: Calcutta[Kolkata], The Kalighat Temple

It is a nice job you are doing, introducing us to our ancient heritage. Thanks on behalf every Kolkatan. I would like to invite you to my blog- http://kolkatamemoirs.blogspot.com