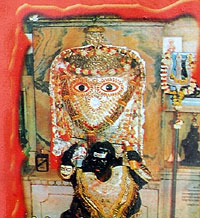 Bhairava ["Terrible" or "Frightful"] , sometimes known as Bhairo or Bhaironor Bhairadya, is the fierce manifestation of Shiva associated with annihilation.  He is one of the most important deities of Nepal sacred to Hindus alike.
He is depicted ornamented with a range of twisted serpents, which serve as earrings, bracelets, anklets, and sacred thread [. He wears a tiger skin and a ritual apron composed of human bones.  Bhairava has a dog as his divine vahana [vehicle].
Bhairava himself has eight manifestations: Kala Bhairava, Asitanga Bhairava, Samhara Bhairava, Ruru Bhairava, Krodha Bhairava, Kapala Bhairava, Rudra Bhirava and Unmatta Bhairava. Kala Bhairava is conceptualized as the Guru of the planetary deity Saturn. Bhairava is known as Vairavar in Tamil where he is often presented as a Grama Devata or folk deity who safeguards the devotee on all eight directions (ettu tikku). Known in Sinhalese as Bahirawa, he protects treasures. Lord Bhairava is the main deity worshipped by the cannibalistic Aghora sect.
Legends

The origin of Bhairava can be traced to the conversation between Lord Brahma and Lord Vishnu recounted in "Shiv Maha-Purana" where Lord Vishnu asks Lord Brahma who is the supreme creator of the Universe. Arrogantly, Brahma tells Vishnu to worship him because he (Brahma) is the supreme creator. This angered Shiva who in reality is the creator of all. Shiva then incarnated in the form of Bhairava to punish Brahma. Bhairava beheaded one of Brahma's five heads and since then Brahma has only four heads. When depicted as Kala Bhairava, Bhairava is shown carrying the decapitated head of Brahma Cutting off Brahma's fifth head made him guilty of having slain Brahma, and as a result, he was forced to carry around the head for years until he had been absolved of the sin.

Another story of the origin of Bhairava is the tale of Shakthi wife of Shiva. Shakthi, the daughter of the king of gods, Daksha, had chosen to marry Shiva. Her father disapproved the alliance because he perceived Shiva as an ascetic associated with a frugal lifestyle, forest animals and ghosts. Eventually, Daksha held a yagna [a ritualistic sacrifice] and invited all the gods, but not Shakthi and Shiva. Shakthi came to the yagna alone, where Daksha publicly spoke in a belittling manner about Shiva. Shakthi could not bear to hear her husband insulted and offered herself to the sacrificial fire.


When Shiva learned of this, he destroyed the yagna and killed Daksha by beheading him. Shiva carried Shakthi's corpse on his shoulders and ran uncontrollably all around the world for days. Since this would eventually destroy all creation, Vishnu used his Sudarshan Chakra [divine discus] to cut Shakthi's body into pieces, which then fell all around. These spots where Shakthi's body parts fell are now known as Shakti Peeth.  In the form of the frightful Bhairava, Shiva is said to be guarding each of these Shaktipeeths. Each Shaktipeeth temple is accompanied by a temple dedicated to Bhairava.


Among other buildings outside the Purana Qila are two Hindu temples, which are dedicated to Bhairavji, an fierce incarnation of Lord Shiva, also known as the destroyer among the Hindu trinity of Gods. There is a story around that the temple or at least its core dates back to the time of Indraprastha.

Conclusion can be derived that the basis of the temple might be of that era, even though the building itself is not much old. The most amazing factor of this temple is that the reigning deity of this temple is not offered milk as is usual in Shiva temples, instead its given alcohol. There is, however, a regular temple here too called the "Dhudhiya Bhairon", where one can offer milk.

People who have interest in Tantrik siddhis, visit here regularly.Lord Bhairav is known as granter of siddhis.

The legendary temples of the northeastern end of Old Fort said to have been built during the Mahabharata times by Pandavas.Its said that Bheem [one of the pandava brothers] worshipped here and got siddhis.The complete name of temple also suggests that ,its called "Pandav kaleen Sri Kilkari Bhairav Temple" . There are two temples dedicated to Bhairav ji,offering made to the residing deity is alchoal in Kilkari bhairav temple and  milk in doodhiya bhairav temple. The unique concrete cow  built here, which is under serve as water taps is interesting.

By Air - Delhi's Indira Gandhi International Airport is connected to all the important cities of the world with almost all the major international airlines operating out of here. Palam Domestic Airport connects Delhi to the major cities in India.


By Road - Delhi is well connected to all the major cities of India by a network of highways and roads. Buses can be taken from the three Inter State Bus Terminus, at Kashmere Gate, Sarai Kale Khan and Anand Vihar, as well as many starting points in and around the city, from which various state-managed and privately run transport facilities like airconditioned, deluxe and ordinary coaches operate

For Travel within Delhi - For travel in Delhi there are buses, the Metro train, auto-rickshaws and cycle- rickshaws. Tourist taxis ply interstate while the yellow and black taxis can be used to commute anywhere within the city and are safe but relatively expensive. Delhi Transport Corporation buses go anywhere in the city and are the cheapest mode of transport. Auto rickshaws are another option too. Luxurious special tourist buses are also available with packaged tours to all the tourist attractions in Delhi.The recently introduced Delhi Metro railway line is a convenient and efficient mode of transport connecting all major places within the city.