Vaital Deul Temple, situated near Bindu Sarovar, is a Tantric temple constructed during the eight century. The temple belongs to an offshoot of Kalinga School, the Khakhara order. The main deity is Chamunda, the Tantric form of Goddess Durga. Chamundi Devi is depicted with bright red tounge which is protruded out and wearing a necklace with skulls adorning it.

Vaital Temple is renowned for its striking feature of the deul, means tower, with rectThripuraar shape and also for the sculptural beautification of the temple walls and tower. The temple is believed to be the major center for Tantric worship and training. The temple showcases a style of worshipping with a mix of elements from particular sects of Buddhism and Hinduism.

The entrance is decorated with a four-faced linga with remarkable carvings. The image of Surya God flanked by his sisters Usha and Pratyusha is placed on the eastern face of the tower. An image of third Pandava, Arjuna, driving his chariot is also seen on the tower.
The temple is appreciated for its sculpture and architectures. Many devotees also visit here to offer prayers.

Vaital temple is perhaps the finest extent representative of the Khakhara order of the Kalinga style of temple architecture, an order that was specially devoted to the tantric cults. The deul rectangular in shape and oblong on plan, is positioned at a right angle to the flat-roofed jagamohana. The two-storeyed semi-cylindrical wagon roof of the deul strongly suggests the influence of Buddhist cave architecture. The vault of the deul is rather plain without any art work and the shape of the common deul in miniature form adorns the four corners of the jagamohana. In place of the traditional ratha projections, the bada has shallow pilasters. On the backside, the five pilasters have been crowned by two vidalas seated back to back above two carved mouldings.

The medallion of the upper chaitya window, in addition to a ten-armed Nataraj, has the figures of Lakulisa on the south and the composite form of Hari-Hara on the north. In front of the jagamohana the stone post shows two Buddha like figures seated in the famous dharmachakra pravartana mudra. The unconcealed apathy and animosity of the Pasupatas [ardent Shiva worshippers] towards Buddhism has probably provided the inspiration for the ironical representation of the Buddha on the sacrificial post found in front of the Vaital deul that was once an important centre for the esoteric rites of the Tantrics.

The presiding deity of the temple is Chamunda, a tantric cult-name for Durga or Shakti. In keeping with the requirements of the sect, the sanctum is dark and the whole atmosphere is disquieting and weird. The eight-armed Chamunda, locally known as Kapalini, planked by an owl and a jackal, sits on a corpse. Her body, emaciated and reduced to skin and bones, is adorned with the garland of skulls. Her sunken eyes and shrunken belly and the cerie setting with a number of strange images filling the niches around the sanctum, present here in her terrible best. 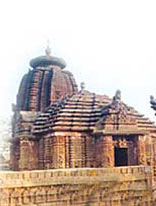 By Air - Bhubaneshwar is the nearest airport about 60kms from Puri. It is well connected to the other major cities of India.

By Rail - Puri is wel connected to the major city of Orrisa by regular and few express trains.

By Road - Puri is well connected by road with important cities in and out of the state, Bhubaneshwar, Konark, Berhampur, Taptapani, Sambalpur and Kolkata.

Can you pl enrich this nice blog with a few more photos ? Preferably larger.