Rajarajeswaram : A show by 1000 dancers at Thanjavur Big Temple


Millennium celebrations of the  Big Temple

1000 years passed, since the Big Temple in Thanjavur, Tamil Nadu, was built. King Rajaraja of Chola empire, built this grand structure during his reign.  The Peruvudaiyar Kovil or Brihadeeswarar Temple (பெருவுடையார் கோவில்) also known as Rajarajeswaram at Thanjavur in the Indian state of Tamil Nadu, is the world's first complete granite temple and a brilliant example of the major heights achieved by Cholas kingdom Vishwakarmas in temple architecture.

The temple reflecting Tamil culture, ethos, and Tamil way of life has completed One Thousand years in the month of September,2010, with the Chief Minister of Tamil Nadu  and the Tamilnadu Govt deciding to have a grand celebration of the event - a 1000 years of Raja Rajeswaram. Celebrations commenced on 22nd Sep, the Thanjavur town and the Temple wore a festive look. Many literary sessions and orations later, there was a grand sight on 25th evening - A confluence of a thousand folk artists from 75 troupes in Thanjavur  participated in this cultural event  held in the evenings from September 22 to 24 in venues on the Big Temple premises, Rajarajan Manimandapam, Tholkappiar Sathukkam, Old TNHB quarters and Karandhai.

In view of the millennium celebrations, the Big Temple was brightly illuminated while the entire city had been decked up for the extravaganza. 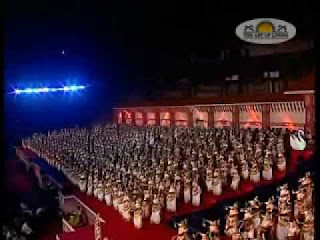 The legendary Padma Subramaniam led these 1000 artistes and arranged, managed the spectacular show. The dancers were from all parts of Tamilnadu and other Indian states, and many had come from foreign countries also ! Everyone of them came to Thanjavur  out of sheer dedication, love, and Bhakti "to perform in front of the God Brahadiswarar and Ambal Brahannayaki."

Chief Minister,  Mr. Karunanidhi presided over this great spectacle - with 1000 artistes in dance dress on a single stage[Medai]. They danced in unison for three songs, starting with ‘Ganapathy Kauthuvam,' followed it up with ‘Thirvisaipa songs of Karuvur Devar' and concluded with ‘Sivapanchaksharam, stotras of Adi Sankara.' It was a rare sight to see the hundreds of artists dancing around the Nandhi Mandapam with the 216-ft-tall Vimana of the Big Temple in the backdrop. The event was par Excellence and Magnificient  !!

On 26th Sep  the celebrations came to an end.  A postal stamp and a 5-rupee coin both depicting the magnificent edifice were released by the Chief Minister.   He also gave 1000 of these 5-rupee  coins to the dancers. The coins were in a golden-bag [Porkizhi, in Tamil] and Padma Subramaniam was unable to lift the bag ! If a single coin would weigh 9 grams, then the Porkizhi would have weighed 9 kg! On the whole--- a very remarkable celebration to be remembered for generations to come!!

Though the celebrations are for the completion of 1,000 years of the Big Temple, the real honour goes to Raja Raja Cholan, the greatest king of the famous Chola dynasty in the south. Also it has proved that lives of great men remind us that we can make our lives sublime. And those who are born artists, when departing leave their hand prints on the sands of time. Raja's personal life or victories might vanish but not his artistic outputs.

Pl. view Video clippings of the 1000 years celebrations of the Big Temple:

The Big Temple Of Thanjavur A World Heritage-1000yrs Old

Also one of  the Seven Wonders of India - The Thanjavur Chola Temple.
Pl click of the link below to view this:
http://www.youtube.com/watch?v=cruwhRpBcwo

For more detailed description of this ancient, beautiful temple, you may log on to my Blog URL which is: http://divyadarisanams.blogspot.com/2010/03/big-temple-also-known-as-brahadeeswara.html

Have you been to this great temple so rich in its Heritage...?  If not, do make a visit and experience the artistic splendour riverberating from all corners of the temple....!!!
Posted by Jolly R at 4:00 AM