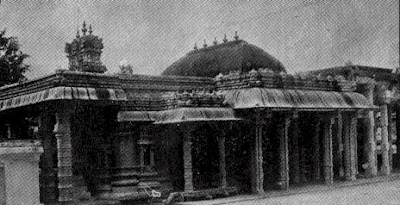 The Tiruvalanchuzhii Shiva temple near Kumbhakonam in Tamilnadu is known more popularly for its shrine to Sweta Vinayakar, said to be made of the foam of the milky ocean (Ksheera Sagaram).
Description: This Shivastalam in the vicinity of Swamimalai (Skandastalam - Aaru Padai Veedu) near Kumbhakonam is a vast temple in a state of neglect, and is known more for the shrine to Valanchuzhi Vinayakar or Sweta Vinayakar. Tiruvalanchuzhi is considered to be the 25th in the series of Tevara Stalams in the Chola kingdom located south of the river Kaveri.
Sweta Vinayakar (Vellai Vinayakar or Nuraippillaiyaar): A white colored image of Ganapati - Sweta Vinayakar is the center of worship here. Legend has it that the Gods (the Devas) fashioned this image out of the foam that was generated when the milky ocean (Ksheera Samudram) was churned by them, in their quest for the celestial nectar Amritam. Indra the King of Devas is said to have had this image in his possession after gaining immortality through Amritam, and during his penance at Swamimalai, set the image down at Tiruvalanchuzhi, after which it became rooted to the spot. The Vinayakar shrine is encountered soon after entering the temple complex. The intricate stone windows and the delicately carved granite pillars in this shrine are of great merit. A ten day festival is celebrated here, during the time of Vinayaka Chaturthi.
Legends: This shrine is associated with Heranda Munivar as is another shrine in the vicinity Kottaiyur. Durvasa muni is said to have carried out a yagnam here, and the Devas who attended it are said to have established several Siva Lingams here. It is believed that Kaveri went back into the ground, and when Heranda Muni went after it to retrieve it, it came back to the surface in this shrine, and made a complete circle to the right, hence the name Valanchuzhi.
The Temple: This temple occupies an area of about 8 acres, has a huge tower decorating its entrance. There are shrines to Brihannayaki (Periyanayaki), Subramanyar, Dakshinamurthy, Herandamuni, Aarumugar and others. There are several interesting sculptural features in this vast temple, now in a state of neglect. Images of celestial nymphs display enormous amounts of detail. Inscriptions reveal that Raja Raja Cholan had made several endowments here. There are inscriptions here from the period of Parantaka Chola I. There are as many as 5 mandapams with intricately carved pillars and stucco images. Murals from the Nayaka period, now in a state of disrepair are also seen here; these images depict the dance of Shiva during the Pradosha worship. The sculptural work in the Valanchuzhi Vinayakar shrine here are of great merit. Mentioned must be made of the lavishly decorated pillars and the niche deities.Ambal's shrine is located to the right of Shiva's shrine here.
Festivals: Vinayaka Chaturthi, and a festival on the 6th day of the bright half of Margazhi (Sagitarius) are celebrated here. This temple is managed as a sub temple of the famed Swaminathar Temple (Subramanya) nearby. Festivities surround this temple in the Tamil month of Pankuni, when an image of Subramanya is taken in procession from Swamimalai to Tiruvalanchuzhi, when episodes from Vallikalyanam (in which Ganapati the elder brother of Skanda is said to have come to his aid, while the latter attempted to gain Valli's hand in marriage).
Travel Base: Thanjavur
Posted by Jolly R at 9:31 PM