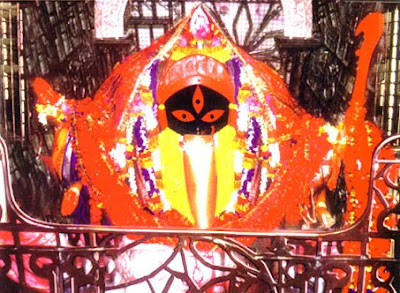 The Kalighat Kali temple in Calcutta in Bengal is one of the most visited temples in Eastern India, and is regarded as one of the Shakti Peethams of the Indian subcontinent.
Kalighat is located in the city of Calcutta on the banks of the river Hooghly (Bhagirathi). The name Calcutta is said to have been derived from the word Kalighat.
Kaali is regarded as one of the principal deities of Bengal. There are other temples to Kaali - Sahasrabhuja Kaali, Sarvamangala, Tarasundari and Simhavaahini. Kaali is regarded as the destroyer or liberator and is depicted in a fearful form. Despite the terrifying form, she is considered to deliver bliss to worshippers. The Kalighat temple attracts numerous devotees throughout the year.
Kalighat is regarded as one of the 52 Shakti Peethams of India, where the various parts of Sati's body are said to have fallen, in the course of Shiva's Rudra Tandava. Kalighat represents the site where the toes of the right foot of Shakti or Sati fell.
The Temple: The Kalighat temple in its present form iis only about 200 years old, although it has been referred to in Mansar Bhasan composed in the 15th century, and in Kavi Kankan Chandi of the 17th century.
Legend says that a devotee discovered a luminant ray of light coming from the Bhagirathi river bed, and upon investigating its source came upon a piece of stone carved in the form of a human toe. He also found a Syayambhu Lingam of Nakuleshwar Bhairav nearby, and started worshipping Kaali in the midst of a thick jungle. This shrine grew to its present form over a period of time, thanks in particular to the Sabarna Roy Chowdhury family of Bengal. This family is also said to have built the Chitreswari Kaali temple at Chitpur. It is believed that there was a pathway through the jungle between Chitpur and Kalighat, and this pathway is said to have become the Chitpur road of Calcutta.
Kalighat is also associated with the worship offered to Kaali by a Dasanami Monk by name Chowranga Giri, and the Chowringee area of Calcutta is said to have been named after him. The Dakshineswar Kaali temple across from the river, near Belur Math, bears an image of Kaali worshipped by the spiritual leader Ramakrishna Paramahamsa, guru of Swami Vivekananda.
Posted by Jolly R at 2:21 AM