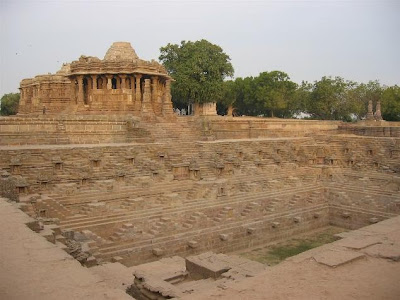 The Sun Temple at Modhera dates back to early 11th century CE and was built by King Bhimdev I in 1026 CE. It was during the same period that the Jain temples at Mount Abu were constructed by Vimal Shah. The Rudra Mahal temple at Siddhapur also dates back to this period. Also re-constructed at the same time was the Somnath temple at Somnath Patan. Interestingly, the grand Brihadeeswarar temple at Thanjavur in South India was constructed during the same time. Even in its ruined state, the sun temple at Modhera is magnificient.. There is no worship offered here now. . There is no shikhara either. The temple has a sanctum, a pradakshina patha and a sabha mandap in front. The exterior of the sanctum has many carved images of the Sun God, portrayed as wearing a belt and long shoes as in the Dakshinaarka temple at Gaya. The mandapa in front of the sanctum has beautifully carved pillars with exquisite toranas adorning the entrances. The exterior of this temple is intricately carved. This temple has been designed such that the sun's rays illuminate the sanctum at dawn, during the time of the equinoxes.In front of the temple is a colossal tank, which was once known as Surya Kund or Rama Kund. The tank has a series of carved steps leading to the bottom. Several miniature shrines adorn the steps of the tank - which is an art gallery in itself.Modhera is now the site of several dance and cultural festivals. The sun temple and the ambience here provide a majestic backdrop for the exhibition of performing arts.
Posted by Jolly R at 2:30 AM