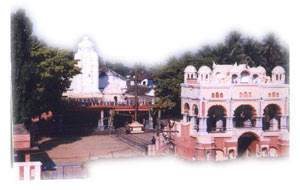 The famous Sun God Temple situated in Arasavalli Village which is at a distance of about 1 K.M. east of Srikakulam Town in Andhra Pradesh head quarters of the coastal district in Andhra Pradesh . It is one of the ancient and all among two sun God temples in our Country. According to Padmapuranam , Sage Kasyapa installed the Idol of Surya at Arasavalli for the Welfare of mankind . Therefore , the Surya is of Kasyapasa Gotra . He is also termed as planetary King . The ' Sthalapuranam ' of the temple narrates that lord Devendra had founded this temple and installed the existing idol of the sun God commonly known as Lord suryanarayana Swamy Varu under the following circumstances . Once Lord Devendra , Ignoring the words of Dwarapalaka Nandi , attempted to force his entry for Darshan of Sri Rudrakoteswara Swamy varu at an untimely hour when Lord siva was along with his consort . The Dwarapalaka Nandi in the discharge of his duties kicked the intruder . Thus kicked and injured by the Devine attendent Indra fell down senceless . And in his unconscious state Indra dreamt that he would be relieved of his pain of injury in his chest caused by Nandi if he built a temple and installed an Idol of the Sun God . After regaining his consciousness , he remembered what he dreamed about . Following his dream he pickedup handfulls of earth three times at a place where he lay ,and there he found this beautiful idol of sun God with his three consorts Usha , Chaya and Padmini . At the base of the idols are the figures of Mathara and Pingala the Dwarapalakas and high up are the two divine saints , sanaka and sanadana holding 'Chatrams'(An Umbrella ). The Sun God is depicted as riding over a chariot drawn by Anura, the Radhasaradhy . All these figures are exquisitely carved out of a single black finely polished grenite stone.

Historical Importance of the Temple Archeological experts say that the stone inscriptions available in the temple throw some light to the effect that Devendra Varma, the Ruler of the Kalinga Kingdom, must have build this temple and installed the image of the Sun God in it in the later half of the 7th Century . The translation of the stone inscriptions reveals the donation of some lands made to the Sun God for perpectual lamps to be installed in the temple , to run a school or a Hostel for the pupils learning Sastras and vedas . These donations are stated to have been made by the successors of the Calinga King Devendra Varma prior to 11th Century A.D. The temple is buildt in such a way as to make the Sun Rays focus on the feet of the God twice in the year in the months of March and September in the early hours of the day . The rays so focused on the feet of the Idol through the five entrance gates of the temple , remain for a few minutes .

Worship of Sun God This temple has the unique feature of attracting crouds of the people of different sects , cults end creeds together and making them believe the God is one and there is no difference between Siva and Kesava. The Five idols ( Panchayatana installed in a particular place in the temple) namely : - 1. Aditya 2. Ambika 3. Vishnu 4. Ganesha 5. Maheswara, represent all the faiths. Finally the devotees visiting this temple , go and worship the presiding diety the Sun God about whom the puranas speak as the embodiment of Trimurthies , Brahama ,Vishnu and Maheswara . The Lord who sees physically everything in the course of his daily round over the universe and who fully understands the truth behind all things , is not only regarded as Pratyaksha Daivam ( Visible God ) but also the source and sustainer of all life . The people who perform ' Suryanamaskara ' resite Maha Soura and Aruna Manthras containing Powerful beejaksharas of Rigveda and Yazurvada for giving good health, so that it is said that "Arogyam Bhaskaradhischet " . The mantra or Hymn is a spiritual formula hormonating sound which always protects the register in every way . This is the secrecy of the Sun God Worship. Sunday is considered as most auspicious day to Sun God worship.

The Pushkarini The Sun God said granted his wish and vanished. Indra dug with his ‘Vajrayudha’ and formed a pond, which is known as Indrapushkarini. Even today Devotees feel that they can attain the Grace of Lord Surya if they offer their prayers after taking a dip in the pushkarini. After taking a holy dip in the pushkarni, they turn towards the temple and open their eyes and do what to they see! Lord Surya’s idol before then in all its great splendor-and clad in golden colored angavastra. Thus the Sun God was consecrated here in Arasavalli by Lord Indra himself. Such is the glory and greatness of this temple.