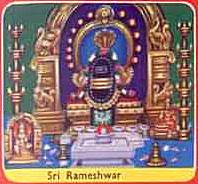 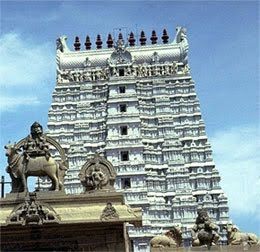 This shrine is located at the extreme south eastern point of the Indian peninsula, in Tamilnadu. The sethu bridge was constructed to link this land to Lanka for the Varnarams to reach Lanka. This island temple resembles the Panchajanya (Vishnu's conch) and like the Tamil letter 'OM'.
The jyotirlingam was worshipped by Lord Rama to atone the sin of killing Ravana. Hanuman flew to bring the Linga from Kailasa, for Lord Rama to wroship. As it was getting late, Rama worshipped the Lingam that was made of sand by Sita Devi. This Lingam worshipped by Lord Rama is known as Ramanathar. When Hanuman returned he was disappointed that his Lord had not used the Lingam that he had brought. Lord Rama pacified Hanuman & named this Lingam Kasi Viswanathar. Devotees have to worship Kasi Viswanathar before worshipping Ramanathar.
Rameswaram is famous for the many teerthams. There are a total of 51 teerthams, 22 of them situated within the temple. Pilgrimage is considered complete with a bath in the Agni teertham. These waters are considered to have medicinal qualities. It is the custom to worship at Dhanushkodi before going to Rameshwaram. Several spots in this island are associated with Lord Rama. The Kothandarama temple stands at the spot where Vibeeshanan sought refuge to Rama.
The temple is situated on the eastern coast. It is a huge structure with three parakarams and several mandapams with mini shrines to other deities. There is a huge Anjaneya in a mini shrine. There is a huge Nandi measuring 12 feet in length and 9 feet in height., with the idols of Viswanatha Naicker and Krishnama Naicker. There are shrines for Ganapathi and Subramanya. To the right of the Lord's shrine is the shrine for Parvathi. To its North is the Kasi Viswanathar's shrine.
On How to Get there: By Air - The nearest airport is Madurai which is 173 kms.
By Rail - Well connected to major cities like Chennai,Madurai,Coimbatore,Trichy and Tanjavur. By Road - Connected with all important towns of Tamil Nadu,buses and taxis ply regularly.
Posted by Jolly R at 3:52 AM

Hi,
Nice attempt. I am amazed to see that you have covered so many places.
I am planning to visit Ramaeshwaram this month (hopefully). Is one day enough to cover the temple? and If photo shoot is allowed and to what extent.

Waiting for your reply
thanks
Shekhar.