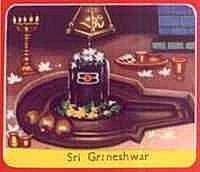 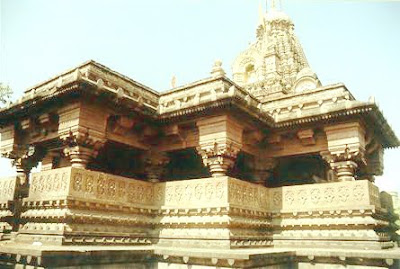 This Jyotir Lingam exists at Devagiri near Ellora. The Lord is known by several names - Kusumeswarar, Ghushmeswara, Grushmeswara, Grishneswara. There once lived a pious brahmin & his wife. He was a great devotee of Shiva. He was not blessed with a son. At the persuasion of his family, he got married to Kusuma, in order to give him a son. Kusuma was an even greater devotee of Lord Shiva. Everyday she would make one Siva Linga, worship it and then immerse it in the temple tank. Soon she was blessed with boy baby. The first wife was seeting with jealousy & ill treated Kusuma. Putting all her faith in the Lord, Kusuma bore all the sufferings humbly. When the boy grew older, they planned his wedding. The jealous first wife, killed the boy with an axe. Kusuma was deeply grieved, yet did not stop her daily worship of Lord Siva. She continued to make the Lingam, worshipped & immersed it in the tank. To the surprise of one and all, her son rose out of the water one day, coming back to life.
Lord Siva apperaed before them & blessed them. He declared that he would give darshan to devotees in his Jyotir Linga swarupam at the same spot where Kusuma immersed the Lingams. This Jyotir Lingam is considered to exist in two places, one at Devagiri near Ellora & the other at the Kailasa temple at Ellora.
On How to Get there: By Air - Nearest airport is Aurangabad. By Rail - Aurangabad is directly connected by rail with Bombay, Manmad, Nasik Road, Kalyan, Secunderabad (Hyderabad) and with other cities via Manmad. By Road - Aurangabad is well connected by good motorable road with Ajanta 106 kms, Bombay 392 kms, Ellora 30 kms, Nanded 272 kms, Nasik 221 kms, Pune 229 kms Shirdi 136 kms and other important cities.
With this, my Chapters on "Jyotirlingam Sthalams/Temples" comes to an end. The next Chapters of mine will be on " Pancha Bootha Sthalangal - Siva Temples".
Posted by Jolly R at 4:40 AM