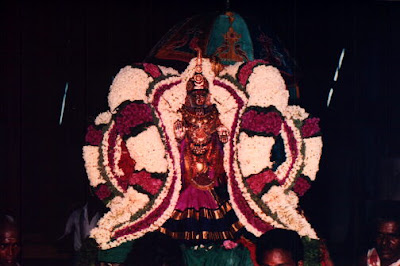 Of the numerous temples that line the southern meteropolis of Chennai, the Kalikambal temple in the heart of old Madras, in George Town stands out for its historic significance and its tradition of festivals, and it attracts thousands of devotees throughout the year. This temple has been visited by the great Maratha ruler Shivaji, and its visibility has grown steadily in the last two decades.
The Kalikambal temple located in Thambu Chetty Street in the heart of George Town in the business district of Chennai is among the most visited temples in the meteropolis.
This temple enshrines Kalikambal (Kamakshi) and Kamateswarar and a host of parivara devatas. The history of the temple goes back to a few hundred years. The great Maratha ruler Shivaji is said to have visited the Kalikambal shrine in Chennai, during his tour of the southern region of the Indian subcontinent. It is said that the original location of this temple was closer to the sea shore and that it was relocated to its present location during the period of British rule in India. It is also believed that a firece ugra form of the Goddess was held in worship earlier, and that this form was replaced with the Shanta Swaroopa form of Kamakshi, along with a Meru in the recent past.
This temple has a rich tradition of festivals, which are celebrated in splendor even today in the limited space that is available in the neighborhood. The Kinnitter - a chariot lined with metal cymbals is unique to this temple, and the kinnitter procession in the month of Vaikasi attracts large crowds. The Navaratri and the Vasanta Navaratri festivals are also of a unique nature here. This temple has grown in popularity exponentially over the last two decades. Unprecedented crowds throng the neighborhood on Fridays and during special celebrationsand the last two decades have seen major construction activities within the temple complex.
The presiding deity in this temple is Kalikambal (Kamakshi) enshrined in a west facing sanctum.
Entrance to the temple is through a modern Rajagopuram built and consecrated in the early 1980s. An inner mandapam leads one to the east facing shrine to the festival image of Kalikambal - Utsava Periya Nayaki. A south facing entrance leads one into the innermost prakaram of the temple, where the west facing sanctum is located. To its right is the shrine to Kamateswarar. Also in this enclosure are shrines to Arunachaleswarar and Subramanyar facing east, and the navagrahams. A flag staff is situated directly across from the sanctum, in the western portion of the outer prakaram, which also has shrines to Ganesha and Subramanyar (Vada Katirkaman). In the northwestern corner of the outer prakaram is a cluster of shrines to Vinayakar, Veerabhadrar and Kali facing south. There are a few other shrines in the northern portion of the prakaram, where the yagasalai is also situated.
In the north east corner of the outer prakaram is a large shrine to Natarajar and Sivakami. This shrine also serves as the alankara mandapam, where the festival image of Kalikambal is housed during the annual Bhramotsavam.
Festivals
The Kalikambal temple located in the crowded business district of Chennai observes several festivals throughout the year. Fridays in general are considered to be of significance here. Of greater significance are Fridays in the tamil months of Thai (Capricorn) and Aadi (Cancer).
The annual Bhramotsavam lasting for a period of 10 days is celebrated in the tamil month of Vaikasi (May 15 - June 15). The Vasantotsavam of the spring festival follows this celebration. The Vasanta Navaratri and the Navaratri festival involve the decoration of the mahamandapam in front of east facing shrine (of the processional image) with a unique facade lined with metal cymbals similar to those used in the kinnitter (or the chariot of cymbals) again unique to this temple. The 10 day Margazhi festival in the month of Saggitarius (Dec 15 - Jan 14) involves the procession of an image of Manikkavacakar for a 10 day period, culminating in Arudra Darisanam, when the image of Nataraja is taken out in procession in the early morning hours, and the image of Kalikambal is taken out in procession in the evening.
The Maasi Makam festival involves a procession of the deity to the seashore. The float festival celebrated once during prosperous times involved a procession in the month of Capricorn, three days after the full moon to the Kachabeswarar temple tank in the vicinity. Several other minor festivals are celebrated throughout the year.
Posted by Jolly R at 1:57 AM