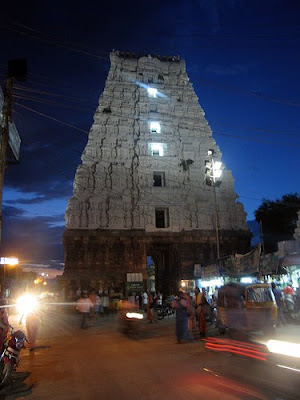 This ancient temple dedicated to Shiva is one of the Pancha Bhoota Stalams (temples celebrating Shiva as the embodiment of the primary elements), air being the element in case here, the other five temples being Tiruvannamalai (Fire), Chidambaram (Space),Tiruvanaikkaval (Water) and Kanchipuram (Earth) respectively.
Kalahasti is located near the pilgrimage town of Tirupati and is visited by thousands of pilgrims. This temple is also associated with Rahu and Ketu, (of the nine grahams or celestial bodies in the Indian astrological scheme).
Antiquity: This temple has been referred to in pre-Christian Tamil literature. The Tamil Saivite saints of the 1st millennium CE have visited this temple and sung its fame. The adjoining hill Dakshina Kailasam has many a fine Pallava carving.
The Tamil Cholas and the Vijayanagara Rulers have made several endowments to this temple. Adi Sankara is said to have visited this temple and offered worship here. There are Chola inscriptions in this temple which date back to the 10th century CE.The
Telugu poem 'Sri Kalahasti Satakam' explains the traditions associated with this temple.Muthuswamy Deekshitar, one of the foremost composers in the Carnatic Music Tradition has sung the glory of this temple in his kriti 'Sree Kaalahasteesa'.
Other works on this temple include the Sree-Kalattipuranam of the three brothers Karunapprakasar, Sivapprakasar and Velappa Deekshitar, Tirukkalattipuranam by Aanandakoottar of Veerainagar and Tirukkalatti Ula by Seraikkavirayar.
Architecture: The vast west facing Kalahastiswara temple is built adjoining a hill, and on the banks of the river Swarnamukhi. At some points, the hill serves as the wall of the temple. The temple prakarams follow the contour of the adjoining hill and hence the temple plan is rather irregular. North of the temple is the Durgambika hill, south is the Kannappar hill and east is the Kumaraswamy hill.
Krishnadevaraya built a huge gopuram, a few feet away from the entrance to the temple. The entrance to the temple is crowned with a smaller tower. There is an underground Ganapati shrine in the outer prakaram, while in the innermost prakaram are the shrines of Shiva and Parvati.
The present structure of the temple is a foundation of the Cholas of the 10th century, as testified by inscriptions; improvements and additions were made during the subsequent years of the Chola rulers of Tamilnadu and the Vijayanagar emperors.
The Manikanteswarar temple, also in Kalahasti dates back to the period of Raja Raja Chola I (early 11th century), and it was reconstructed in stone in 1196 by Kulottunga III. Shiva here is also referred to as Manikkengauyudaiya Nayanar. There is also a Vishnu shrine in this temple.
Legends associated with this temple: The legend here is similar to that of the Jambukeswara temple at Tiruvanaikka. Shiva is said to have given salvation to a spider, elephant and a serpent who were ardent devotees of the Shiva Lingam located here. The spider is said to have attained salvation in Kritayuga (the first of the four yugas in the Hindu tradition), while the elephant and the snake were devotees in Treta Yugam, the succeeding aeon. The elephant's devotional outpouring was a source of disturbance to the serpent's display of devotion and vice versa, resulting in animosity between the two, until Shiva's intervention gave both the devotees their liberation.
Kannappa Nayanaar, a hunter is said to have been a great devotee of Kalahasteeswarar. Legend has it that he offered his own eyes to the Shivalingam, and for this reason earned the name Kannappan (his original name being Thinnan), and the distinction of having his statue adorn the sanctum. Nakkiradevar, Indra, Rama, Muchukunda and others are believed to have worshipped Shiva at this temple.
Festivals: Maha Shivaratri which occurs in the Tamil month of Maasi (Feb 15 through March 15) is one of the greatest festival seasons here, and the celebrations are marked by processions of the deities. The fifth day of the festival in the month of Maasi coincides with the Maha Shivaratri.
Access and Accomodation: Tirupati (30km) is the nearest airport and is perhaps the most convenient base for visiting Kalahasti as it (Tirupati) is endowed with several modern lodging facilities. A one day trip from Chennai is also possible, as Kalahasti is well connected by road with Tirupati and with Chennai and is only a four to five hour drive from Chennai. If well planned, Tirupati, Tirumala and Kalahasti can be covered in a day's trip from Chennai by car.
Posted by Jolly R at 8:59 PM