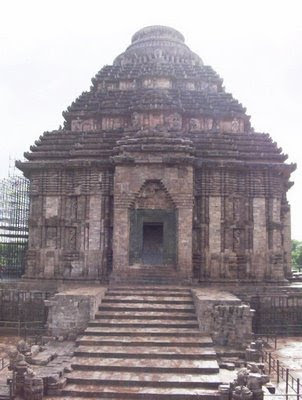 The Sun Temple of Konark, often called as the Black Pagoda, was constructed in the mid thirteenth century by Raja Narasinghs Deva-I of the Ganga Dynasty. It is an ample testament to the artistic glory of the time. Conceived in the form of a huge chariot drawn by seven spirited horses on 12 pairs of exquisitely decorated wheels--after the mythical seven horse chariot of Sun God--the temple was unique in its architecture and implementation.
Legends of Konark
The local legends say that King Narasimha Deva-I of the Ganga Dynasty had ordered the temple to be built as a symbol of political supremacy of his dynasty. Over 1200 of the most capable artisans and architects worked continuously for 12 years on the construction of the temple. It is said that the king had already spent an amount equal over 12 years of the tax collections. However, the completion of the temple was still far from over. Enraged the king issued an ultimatum that the work be completed by a stipulated date with dire consequences otherwise. The team of architects headed by Bisu Maharana was unable to produce a solution to their architectural problem. It is said that Dharmapada--the young son of the chief architect Bisu Maharana--arrived there as a visiting onlooker. He became aware of the anxiety looming large among the architects. Although he did not have any practical experience of temple construction, he was careful in his study of the theories of temple architecture. He offered a solution to the problem of fixing the last stone at the top of the temple. He surprised everyone by doing that himself. But soon after his glorious achievement the dead body of this adolescent prodigy was found on the sea beach at the foot of the temple. It is often regarded that Dharmapada laid down his life to save his community. The temple was dedicated to the Sun-God (Arka), popularly called Biranchi-Narayan, and the area in which it is located was known as Arka-Kshetra as well as padma-kshetra. According to folklore, Samba, son of Lord Krishna, was struck with leprosy due a curse of Lord Krishna himself. Samba for 12 years underwent harsh atonement at Mitravana, near the convergence area of Chandrabhaga River with the sea at Konark. He was finally successful in pleasing the SUN god (Surya), the healer of all skin diseases, and was cured of his ailment. In gratitude, he decided to erect a temple in the honor of Surya. The day following his cure, while Samba was bathing in the Chandrabhaga, he discovered an image of the god, which had been fashioned out of Surya's body by Viswakarma. Samba installed this image in a temple he built in Mitravana, where he propitiated the god. Since then, throughout the ages, this place has been regarded as sacred.
Location of Konark - Konark is situated at latitude 19° 53' North and longitude 86° 06' East. It is a village in Gop police station under the Puri subdivision. From Pipli a 45 kilometres long road leads via Nimapara and Gop to Konark in the south-east. Konark is 66 kilometres by all-weather road via Pipli from Bhubaneswar, the Capital City of Orissa; and 84 kilometres from Puri, the district head quarters, also via Pipli. The entire territory lies in the Topical zone and hence is subject to high temperature. However the sea exercises a modeling influence on the climate of the Konark. So the Konarka has a pleasant climate all the year round. The maximum temperature in summer is 110° F and the minimum temperature in winter is 51° F. In Summer, cotton and in winter, light woolen clothing is required. People are hospitable in nature and Hindi and Bengali are understood and some times spoken by the people, besides Oriya. English is generally understood and spoken by all the literate people. Best season for visiting Konark is from October to April, specially the winter season
How To Reach Konark - The convenient way to get to Konark is drive either from Puri, 35 km or Bhubaneswar, 65 km. The drive from Puri along the sea front is a treat through coastal villages and its beautiful houses.Buses as well taxis are freely available from Puri. From Bhubaneswar, however the bus services less frequent and takes about 3-3 V2 hrs to cover the distance, while from Puri the service is very prompt, taking about one hour to reach Konark.A round trip from Puri to Konark by AC/non AC Car Rs. 750-1000/Rs. 500-750. More adventurous lot cycle to Konark from Puri and stay there overnight.
Konark Dance Festival The enthralling Konark Dance Festival is held every year, from 1 to 5 December, in Konark, in the backdrop of the mammoth Sun Temple. The festival has made the famous tourist destination that the Konark is even more attractive in the eyes of the tourists.
Posted by Jolly R at 10:10 PM

Thanks for this post. Konark Sun Temple is also called as Konark Temple. Temple is attract tourist most, it is located in Orissa india.The chariot is very huge and has 12 pairs of stone-carved wheels and also a squad of seven running horses. Seven horses, symbolizes the seven days of the week, 12 pairs of wheels symbolizes the 12 months of the year.