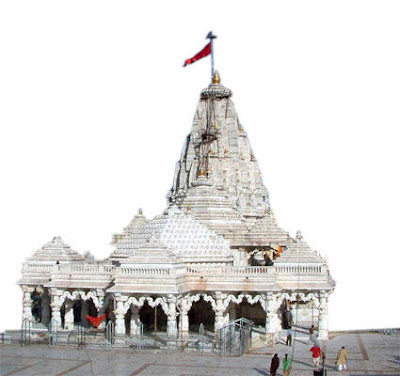 The Ambika Shakti Peeth is located at Arasur near Mount Abu, in the south west end of the Aravalli hills in northern Gujarat. The river Saraswati originates here and disappears into the desert of Kutch. Also located here is the Koteshwar Mahadev shrine.The three main Shakti Peethas of Gujarat are Ambaji at Arasur, Bala at Chunval and Kali at Pavagadh near Champaner.
Other Shakti shrines in Gujarat are those at Asapura in Kutch, Arbudadevi on Mount Abu, Sundari at Halvad, Harsiddhi at Kolgiri or Koyla and Anasuya on the Narmada.Following the destruction of Daksha's sacrifice and the Rudra Tandava of Shiva parts of Sati's body fell at several places throughout India, and these places are revered as Shakti peethas. The left breast of Sati is believed to have fallen here. There is no image of Ambika here, there is only a Yantra. Shakti here is Durga, the consort of Shiva. There are inscriptions from the 16th century onwards here.
Legend says that Vimalshah is said to have worshipped Ambika prior to building the Dilwara temple at Mount Abu. There are inscriptions elsewhere from as early as the 8th century mentioning Ambika. At Balaa in Chunval, she is a kanya and at Pavagadh she is

Bhadrakali the liberator.The river Saraswati is said to originate at Plaksha Prasaravana in the Shivalik hills of the Himalayas, and disappear into the ground at Vinasana near Kurukshetra. It is said to originate again at Ambaji, and disappear into the Kuthch desert, originate again in the Gir forest in Saurashtra and drain into the sea at Somnath. The Mahabharata, Padma Purana, Saraswati Purana and the Skanda Purana describe these beliefs associated with the river Saraswati.
Another Legend says that Krishna worshipped Shiva and Ambika at Ambikavana and that Rukmani worshipped Ambika here prior to her marrying Krishna.
Legend says tha the tonsure ceremony of Krishna the child was performed here at Ambaji. Mount Abu or Arbuda is associated with Vasishta, and is believed to have bene home to his hermitage. Nandini, his cow is said to have fallen into a pit, and the river Saraswati is said to have filled the pit with water to enable the cow to come out.
Posted by Jolly R at 10:55 PM

I like your blog post. Keep on writing this type of great stuff. I'll make sure to follow up on your blog in the future.
Param Shakti Peeth