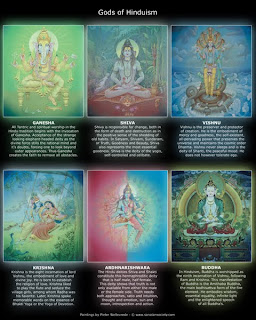 Contrary to popular belief in the West, Hindu deities are not "individual gods", indicating a polytheistic faith. They are, rather, different representations of particular aspects of the one god, the source, known as Brahman. The "human" or physical representation of Brahman's aspects or attributes in the form of deities is a vehicle for the devotee to focus his or her attention, devotion or meditation on that particular aspect or attribute in a form more easily visualized and held in the mind. The many deities of Hinduism, which may be seen as reflecting different aspects of Brahman, are represented by images. Use is made of such features as posture, dress, multiple arms and symbolic objects to represent each deity. It should be noted, however, that there may be a range of different ways of representing a particular deity, particularly when the deity is seen to represent several different qualities. In some cases, symbols are used to show that a deity belongs to a particular 'family', e.g. there is a range of deities associated with Vishnu. In addition some symbols belong to the common heritage of Hinduism or more generally of India. Images may be made from metal, stone, wood or plastic. The images found in temples will tend to be much more majestic than those found in Hindu homes. The image only becomes a "murti", an embodiment of Brahman, through a special act of consecration when it is installed in the temple or home. It then becomes a focal point for worship. Some images are consecrated on a 'permanent' basis and will continue to be used on the temple or home shrine unless they become damaged. Broken or damaged images are discarded as they no longer fulfill their purpose of representing the deity. Sometimes an image will only be consecrated for a specific period of time, e.g. a festival, after which it will be destroyed, perhaps as part of the concluding ritual of the festival. Each deity is associated with a 'vehicle', a bird or animal on which it travels. The vehicles are used in Indian religious art to reflect and at times to extend the powers or qualities of the deity with which it is associated. These are often better expressed by an animal than by a human being. The vehicle also represents the close relationship between all living things. There is a range of views within Hinduism about images of the deities. Most accept that within the context of worship they mediate the presence of Brahman/the particular deity and help the worshipper to visualize the deity. To those outsiders who find it difficult to empathize with the brightly colored plastic images which feature in many Hindu homes, some Hindu writers point to the very 'concrete' mental images of God held by many worshippers in other traditions, e.g. God as 'an old man in the sky'. Perhaps the very fact that there are so many images makes the point that each can tell only a very small part of the whole story. REVISITING OUR HERITAGE.....I capture here the "Ancient Temples of India" - the grandeur of some of the famous temples, their deities and their Sthala Puranams. As my camera moves, I unfold to you the various temples of our Hindu Deities.
Posted by Jolly R at 1:41 AM