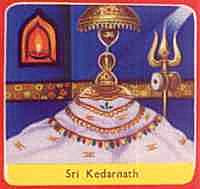 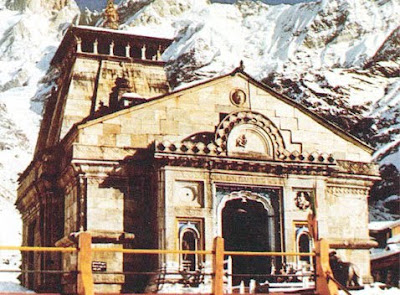 Kedarnath is situated in the Himalayan slopes in the Gharwal district of Uttar Pradesh. The uniqueness and greatness of this temple sees mention in the vedas, ithihaasaas, epics. The term Kedara for the Lord denotes * The Lord who holds the holy Ganges in his matted locks & allows it to flow evenly to the world. * It could also mean the mark that is left on the Lord's head from the time when Arjuna got the Paasupathastram.
This shrine is located at an elevation of 11,735 feet above sea level. The region of the Himlayas, where the shrine is located is known by several names such as Gandhamadana parvatham, Sumera parvatham, Pancha parvatham, etc. (Pancha parvatham, for this is the spot of five sacred peaks namely Rudra Himalayas, Vishnupuri, Brahmapuri, Udayagiri & Swargarohini.
The exterior of the temple is rather simple, but the interior is adorned with marvellous sculptures. In the garba griha is an irregular shaped conical rock which is about five feet by four feet. Lord Siva in the form of jyotirlingam is worshipped here as Lord Kedareshwar. It is believed that the jotirlingam is actually the rump of the bull, which was the form that Lord Siva assumed, when the Pandavas tried to reach him to atone the sins of the Kurukshetra war. Since it was not time designated for humans to worship the Lord here, Lord Siva tried to go away in the form of a bull. It is believed that temple structure that exists till date was actually the one constructed by the Pandavas.
The sannadhi of the Lord is facing South. There are the idols of Kedaragowri, Krishna, Pandavas, Draupadi, Vinayagar, Veerabadrar, Kaarthikeyan, Nandi.. The shrine is covered by snow for 6 months in a year (closed from Oct-Nov upto Apr-May). It is believed that this is the time when the Devas are worshipping the Lord. There is mountain path called Sorga Vaasal, through which the Pandavas, Sankaracharyar are supposed to have gone through. he river Mandakini flows down from near this area
On How to Get there: By Air - The nearest convenient Air port is Delhi. Which is further well connected to Mumbai, Calcutta and rest of India through Air network. By Rail - The nearest convenient railway station are Dehradun and Haridwar. These are well connected with Delhi, Mumbai, Calcutta and rest of India through Rail netwaork.
By Road - Kedarnath is connected by road with Badrinath (242 KM), Dehradun (268 KM), Delhi (450 KM), Haridwar (250 KM), Kotdwar (256 KM), and Rishikesh (226 KM).
Route : Rishikesh to Kedarnath vai Rudraprayag :- Rishikesh -> Rudraprayaga -> Agastamuni -> Kund -> Gupta kashi -> Phata -> Soneprayag -> Gauri Kund.Gouri Kund to Kedarnath is 14 KM. This distance has to be covered by foot, ponies, palkies.
Posted by Jolly R at 4:16 AM