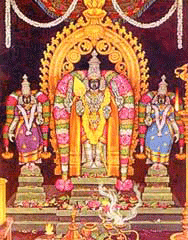 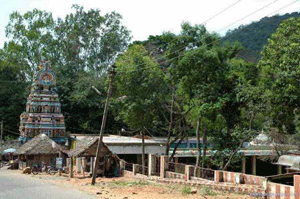 Pazhamuthircholai is situated 19 kilometres from the temple town of Madurai. The place is full of natural beauty and sylvan surroundings. This hill is also known as Vrishabhadri or Idabagiri. At the foot of the hill is situated Azhakar Kovil, which is one among the 108 divyadesams sanctified by the hymns of Azhwars sung in praise of the Vishnu enshrined in this temple. Atop the hill Lord Muruga stands majestically in the temple as the Lord of the Hills popularly known as Kurinji Nilakkizhavan in Tamil. The temple of Pazhamuthircholai can be reached by a motorable road leading to the hill.
Pazhamuthircholai is mentioned as the sixth of Lord Murugan's Aaru Patai Vidukal, the six holiest Murugan shrines described by Cankam poet Nakkirar in his poem Tirumurukarruppatai. Regarding the identity of the sixth major site, there is no consensus among scholars and many local temples are ascribed the distinction. Most scholars, priests and devotees identify Pazhamutircholai with the shrine of Palamutircolai, twelve miles north of Madurai in the Alagar Hills, above the Alagarcoil Vishnu temple. While this temple is not as large or bustling as the other five recognized shrines, it is just as incredible to visit.
This shrine is located on the northern outskirts of Madurai in a pleasant wooded hill not far from Alagar Visnu Kovil, a fortified temple complex revered as one of the 108 abodes of Vishnu glorified by the hymns of the Alwars. At the top of the hill, is Noopura Ganga, a perennial waterfall with a temple dedicated to Rakkayi Amman. The Nûpura Ganga atop the hill is said to originated from the anklet of Tirumal or Visnu and hence the name of the spring. It is said that sitting in the madavi mandapa near the spring Ilangovadigal wrote one of the five mahakavyas in Tamil, viz., Silappathikaram. Even today the place is very fertile with many trees and different flora and fauna, a standing testimony to the vivid description of the place's natural beauty as found in Tirumurugattruppadai of Nakkeerar.
Though the sthala is of ancient origin, the temple as in existence today was constructed only recently. From days of yore Vel has been worshipped as the moolavar or main deity. The idol of Lord Muruga in a standing posture has a single face and four hands with Valli and Deyvayanai on both sides. The Vel made up of stone is of special significance and is worshipped with a great veneration by devotees.
The sthala vriksha is a rose apple tree. The fruits of this tree ripen during Skanda Sashti festival. The temple that was in existence during Sangam period no longer existed in Arunagirinatha's time. The recently constructed temple is considered as Pazhamuthircholai and worshipped by the devotees. It is needless to say that it is one of the six abodes of Lord Muruga very extensively praised and described by Nakkeerar in Tirumurugatruppadai. Arunagirinathar also reveres this shrine in his Tiruppugazh. Arunagirinatha sang 16 Tiruppugazh psalms to Pazhamuthircholai Muruga. Though one might be in possession of all types of wealth, if he wants to lead a healthy life bereft of any disease he should necessarily visit Pazhamuthircholai. Arunagirinatha very emphatically says in the most unequivocal terms that Lord Muruga should come before him running to bless each and everyone with health and wealth as has been very clearly described in the Tiruppugazh psalm. Not far from Pazhamuthircholai south of Madurai is the Aaru Padai Veedu, Tirupparankunram.
Posted by Jolly R at 1:25 AM