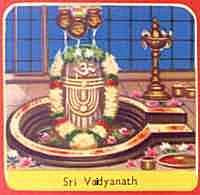 Vaidyanatham is located at Deogarh in Bihar.
The temple structure has a great amount of woodwork. The main sabha mandapam has several huge (wide as well as tall) pillars. There are twenty two other temples in the temple complex. The top of the Siva Lingam is slightly bent. It is said that once Ravana, the king of Lanka, prayed to Lord Siva to make his capital of Lanka invincible. After severe penance, he received the Aathma Lingam from Siva. Unable to carry the huge Lingam, Lord Siva made the Lingam into two halves & placed it in a kavadi.
As Ravana was carrying this back to his Lanka, Lord Varuna caused his stomach to be filled with water. Ravana was desperate to releive himself. Seeing Lord Ganesha in the form of a brahmin boy, he gave it to him to hold (Lord Siva had said that the Aathama Lingam could not be placed on the ground, for wherever it was placed, it would take root). Before Ravana could get back, Lord Ganesha put the Aathmalingam down. The enraged Ravana tried hard to pluck the Lingam from the ground. One half exists in Kokarnam. Ravana started severe penance to Lord Siva, plucking & throwing one head after the other into the homa gundam. Lord Siva revived him by putting his heads back in place. Because of this role of Siva as a healer, as a physician, he came to be called Vaidyanathan (Vaidyan - physician).
On How to Get there: By Air - Nearest Airport is Patna
By Rail -The nearest Railway Station is Baidyanath Dham (Deoghar) which is a terminal station of a 7 kms branch line orignating from Jasidih Jn. By Road - By road Baidyanath Dham (Deoghar) to Calcutta 373 kms, Giridih 112 kms, Patna 281 kms, Dumka 67 kms, Madhupur 57 kms, Shimultala 53 kms etc.
Temple Website http://www.baijnathtemple.com/
Posted by Jolly R at 2:18 AM