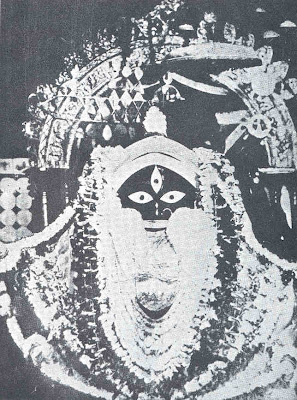 The Indian system of beliefs refers to the female aspect of divinity as Shakti - or the manifestation of energy. Parvati - the consort of Shiva or Lakshmi the consort of Vishnu are enshrined in temples and all over India. Some of these shrines are referred to as Shakthi Peethams, (or the sites where the parts of Sati's body fell as in the legend of Daksha's yagna). Others are ancient shrines closely tied to local legends and beliefs.
All about Shakti:
The Indian system of beliefs worships the primeval source of energy Shakti - in the form of the mother Goddess Devi. Variations of this worship are seen throughout the subcontinent.
Shakti, the mother Goddess, also known as Ambaa (mother), or Devi (Goddess) is considered to be the personification of Cosmic Energy in its dynamic form. It is believed that Shakti is the power and energy with which the Universe is created, preserved, destroyed and recreated (by the trinity of Hinduism Bhrahma, Vishnu and Shiva).
Shakti is worshipped in several forms. As Rajarajeswari or Kamakshi, she is the Universal mother. As Uma or Parvati, she is the gentle consort of Shiva. As Meenakshi - she is the queen of Shiva. As Durga, she rides the tiger, and bears weaponry. In the angry and terrifying form of Kaali, she destroys and devours all forms of evil. As Kaali, she is also the personification of time, her dark form being symbolic of future which is beyond our knowledge. Shakti is regarded as the mother of Skanda and Ganesha.
Shakthi Peethams are centers of Shakti worship, representing sites related to the legend of Daksha Yagna, Shiva and Sati his consort. Belief has it that Shiva performed the rudra tandava dance, carrying the dead body of his consort Sati. The Universe unable to bear the fury of the dance requested Vishnu to intervene, and Vishnu used is chakra to tear the body into several pieces, and bring down the fury of Shiva's tandavam. The severed pieces of Sati's body are believed to have landed in several spots across the region, and these are referred to as Shakti Peethams.
Belief in Shakti or the feminine aspect of Divinity is an integral (and popular) element of the religious fabric of the entire subcontinent. Female guardian deities are revered in all parts of India. The Shakta Agama deals with the worship protocol adhered to in Devi temples. There is a shrine to Shakti, or the consort of Shiva in virtually all Saivite temples throughout the subcontinent. Tantric practices involving chants, gestures and yantras (geometric shapes) also govern the worship of Shakti. Local forms of Shakti, not conforming to Agamic or Tantric rules are also widely prevalent throughout the length and breadth of the region. In the Tamil speaking region, Ambaal - Amman temples and shrines in Saivite temples as well as Maariamman temples are highly prevalent, as are the Bhagawati temples in Kerala. Kaali and Durga are popular deities in the state of Bengal. Kaali is also revered as an exponent of dance, defeated in the art only by Shiva at Tiruvaalangaadu (and in another legend at Chidambaram).

The Kamakhya Devi temple in Assam as well as the Ambaji temple in Gujarat have been popular centers of Shakti worship. The Vaishnao Devi temple in the northernmost state of Jammu and Kashmir as well as the Kanyakumari temple in the southernmost tip of the Indian subcontinent have both been centers of Shakti worship for centuries.
Lakshmi represents the feminine aspect of the preserver Vishnu (of the trinity Bhrahma Vishnu and Shiva), and is regarded as the bringer of prosperity. The Mahalakshmi temple at Kolhapur in Maharashtra regarded as a Shakti Peetham, and the Rangalakshmi or Ranganayaki shrine at Sree Rangam, one of the foremost Vaishnavite centers, are two of the prominent shrines to Mahalakshmi. There is a shrine to Mahalakshmi in all temples dedicated to Vishnu. Lakshmi is featured as a parivaara devata in all temples following the Saiva Agamas.
Saraswathi is considered to be the feminine aspect of the Creator Bhrahma, and is the embodiment of knowledge, learning and wisdom. Sharada Devi - at the Sringeri Sankara Peetham is hailed as the embodiment of wisdom. There is a modern temple to Saraswathi at Pilani in Rajasthan. There are shrines to Saraswathi in several temples all over South India. There is also a little known Saraswathi Ambal Temple in interior Tamilnadu.
Posted by Jolly R at 9:34 PM