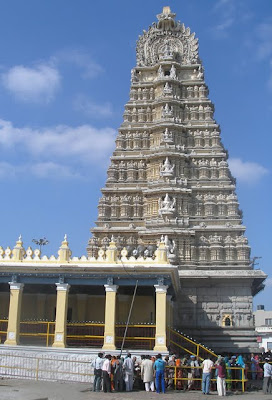 Chamundi Hill is one of the landmark tourist attractions of Mysore, and it never fails to fall on the itenerary of those visiting Mysore. Other historic temples in the vicinity of Mysore are Srirangapatna, Talakkad and Somnathpur.
The Chamundeeswari temple is located on a hill in the vicinity of Mysore and is accessed through a motorable road. Chamundeeswari the tutelary deity of the Mysore Maharajas has been held in reverence for centuries, and the Wodeyars of Mysore have made extensive contributions to this shrine.
A flight of one thousand steps built by the Maharaja Dodda Devaraja in 1659 also leads up to the summit of the hill which is at a height of about 3000 feet. Chamraja Wodeyar IV is said to have worshipped here in 1573 and was miraculously saved from a lightning hit. Krishnaraja III (late 18th century) built the temple tower and presented the Nakshatramalika jewel with sanskrit verses inscribed on it.
Thus much of the current temple is the result of renovation efforts carried out in early nineteenth century, although the original shrine is much older. Chamundi Hill has been associated with the Hoysala ruler Vishnu Vardhana (12th century) and with the Vijayanagar rulers of the 17th century.
Chamundeeswari, or Durga is the fierce form of Shakti who vanquished the demon Mahishasuran. A colorful image of the demon greets visitors as they reach the summit of the hill. Also on this temple are several images of Nandi (the bull mount of Shiva). The best known of these is the collossal Nandi on the 800th step on the hill. This Nandi is over 15 feet high, and 24 feet long. It was created during the reign of Dodda Devaraja, who also built the steps leading up the hill.
There are also shrines dedicated to Shiva - Mahabaleshwar (attributed to Vishnu Vardhana the Hoysala ruler of the 12th century CE) and Lakshmi Narayana - Vishnu on this hill.
Posted by Jolly R at 4:09 AM