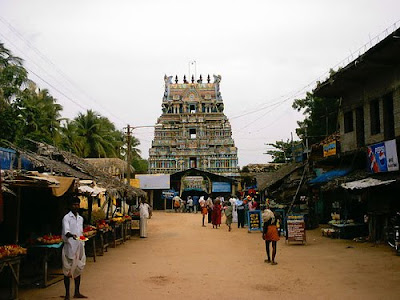 Suryanar Koil, Suryanar Temple or Sooriyanaar Koil, is the first of the 9 Navagraha Temples in Tamil Nadu, located about 1 km from Tirumangalakkudi which lies between Kumbakonam and Mayavaram, near Thanjavur, in Tamilnadu. Popular known as Surya Sthalam, Suryanaar Kovil is dedicated to the Sun God, Lord Surya (the first of Navagrahas (nine planets).The presiding deity, Sri Suryanarayanaswamy, is found in a lying posture inside the sanctum sanctorum with his consorts Sri Usha Devi and Sri Pratyusha Devi. The other eight Navagrahas are seen facing the Sun God. Besides, Suriyanar Temple also embodies the shrines of Kasi Vishwanath, Visalakshi and Brihaspati (Guru) within the sanctum. The Kol Theertha Vinayakar (Ganesha or Pillayar) shrine is a prominent sculpture here. Lord Surya Bhagawan is known as the giver of health, success and prosperity. It is believed that those who are affected by 'Graha Dhosham' and negative influence of Shani (Sani or planet Saturn), Ashtama Shani (Shani in 8th house) and Janma Shani (Shani in 1st house) can visit Suryanar Koil to get relieved of their sufferings. Wheat, Red Lotus, Erukku (Madar Plant) and Sakkarai Pongal are some of the offerings to worship the Lord.

Sooriyanar Kovil faces west and is built in such a way to receive maximum beneficial rays from the planets. Built by Chola King, Kulothunga Chola I in the year 1100 AD, the temple features a huge tower with three tiers and five domes at the top. The sanctum and the ardhamandapam are built of stone. This is the only Navagraha temple where all the nine grahas (nine planets) can be found in separate sannadhis (Sanctums).There is a tank called Surya Pushkarni, which lies to the north of the Rajagopuram. This is considered as a sacred bathing ghat. There are around 15 theerthams in the Suryanar Temple. The one which is located inside the temple is called as Jnana Koopam. The inscriptions from the period of Krishna Deva Raya speak about the endowments made to this temple. The nearby Poolaivala River is an added attraction to this temple. A sacrificial platform (bali peetam) is seen at the entrance and to its east lies a mandap. An idol of a horse, the Sun God’s vaahanam (vehicle), is seen here. The steps in front of Guru Bhagwan lead to the idols of other grahas. The Kol Theertha Vinayakar shrine is worshipped again.

The annual Ratha Saptami festival (Rathasapthami) during the Tamil month of Thai (January – February) is one of the main festival celebrated here. The first Sundays in the months of Aavani (Leo) and Kartikai (Scorpio) is also considered very auspicious. Vijaya Dashami and annual Brahmotsavam festival (Bhrammotsavam) are also held with much devotion.

How to reach Suryanar Temple: