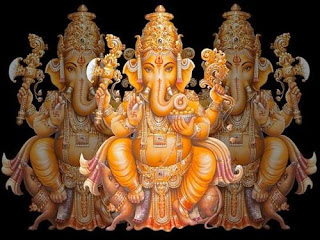 Among the many deities worshipped by the Hindus, Lord Ganesha has in some ways a pride of place. It is not that he is considered to be superior to the great Lords Shiva and Vishnu or the Goddesses but he has a special place in the affection of the people and no worship of any kind or any other deity can begin without an initial worship to Ganesha, among whose many names is Vighneshwara, remover of obstacles.
Ganesha in other forms was known as early as 1200B.C. and was apparently worshipped by several sects in different parts of the country. However, images of this deity are only rarely and infrequently seen in arts and sculpture till the 4th century A.D.
Hindu culture based on the multifaceted Hindu religion has quietly spread beyond the geographical boundaries of India. This Hindu cultural impact is evident from the popularity of Ganapatya in many lands. Ganesha icons and images were seen and found in many lands from the beginning of the first millenium:
My next post will be on Ganapathi Temples / Sthalams......
Posted by Jolly R at 2:00 AM