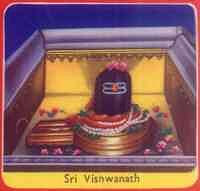 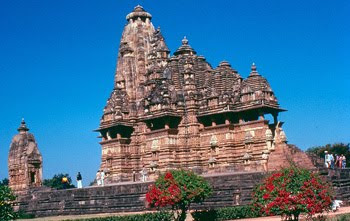 Kasi is amongst the holy spots for visit by the Hindus in Benares in Uttar Pradesh. It is believed that a visit to Kasi ensures liberation & hence pious Hindus seek a visit during their lifetime. This is the location of the Benares Hindu University, the place of learning of several aspects of Hindu culture. The Lord himself has declared this spot as his Royal residence. Goddess Parvathi's mother felt ashamed that her son-in-law had no decent dwelling. To please Parvathi Devi, Siva asked Nikumbha to provide him with a dwelling place at Kasi.
On the request of Nikumbha, Aunikumbha a brahmin made Divodas construct a temple for the Lord here. The pleased Lord granted boons to all his devotees. But Divodas was not blessed with a son. The angered Divodas demolished the structure. Nikubha cursed that the area would be devoid of people. When the place was emptied Lord Siva once again took residence here permanently. The Lord along with Parvathi Devi once again started blessing his devotees with wonderful boons.
Parvathi Devi was so pleased that she offered food (annam) to one and all and hence is worshipped as Annapoorani. The Lord himself is seen with a bowl in his hands asking for annam from the seated Devi at the Devi's shrine adajacent to Viswanathar's shrine. This is considered to be one of the 52 Sakthipeedams (the place where Parvathi's left hand fell, when her corpse was cut by Mahavishnu's sudarsana chakram). The Siva lingam is placed in a square shaped brass plated pit. Devotees are permitted to offer worship such as abhishekam with holy ganga water, garlanding the Lord, karpoora aarathi, etc. personally to the swaymbhu lingam.
There are several smaller shrines around the main shrine. The head of each ghat has a Siva linga shrine. The Lord can be seen placed on a pedestal at every location in the city, even if there is not shrine as such. Behind the temple is situated the temple of Dhundhiraja Ganapathi.
On How to Get there: By Air - There is direct, daily flight connection between Varanasi and New Delhi. Varanasi is also connected by air to Agra, Khajuraho, Calcutta, Bombay, Lucknow and Bhubaneshwar.
By Rail - The city is linked by trains with all metros and major cities across the country - New Delhi (760 Kms.), Bombay (1509 Kms.), Calcutta (735 Kms.), Madras (1970 Kms.) , Lucknow (286 Kms.).There are three railway station - Kashi, City and Varanasi Junction (also known as Varanasi Cantonment), which is the main station and has computerised booking.There are not many trains running directly between here and Delhi or Calcutta but most Delhi to Calcutta trains do pass through Mughal Sarai, 18 km south of Varanasi. This is about 45 minutes by bus or shared autorickshaw.From Varanasi Junction, expresses take 13 to 16 hrs. to Delhi and 13 hours to Calcutta. Other expresses take 28 hrs. to Bombay, 39 hrs. to Madras, 3 hrs. to Allahabad, 41/2 hrs. to Patna, 5 hrs. to Lucknow. By Road - Varanasi is connected with Calcutta (677 Kms.), Delhi (765 Kms.), Madras (1901 Kms.), Bangalore (1763 Kms.) and to the rest of the country by good motorable, all-weather roads.
Posted by Jolly R at 3:10 AM