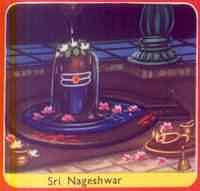 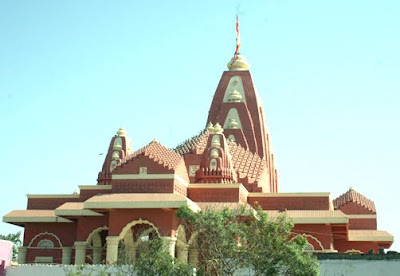 Nageshwar is located near Dwaraka in Gujarat, on the way to Beti Dwaraka. There once lived a rakshasa called Daruka, who was extremely cruel and tortured the good ones. But yet he was a great devotee of Lord Siva. A Siva devotee, Supriya who was a merchant reached the Darukavanam, where Daruka lived with his wife Daruki, while sailing with his goods.
Daruka asked Supriya to teach him the path of devotion to Shiva, the norms of performing pooja and penance. Fearing that Daruka would use any additional powers gained by such penance, to bad use, Supriya refused to guide him. The enraged Daruka began to torture

Supriya. Supriya however was staunch is his faith in the Lord and was unmoved by any torture. Lord Shiva was pleased and appeared and killed the demon Daruka. Daruki, Daruka's wife, now started giving even more trouble than her husband. Shiva vanquished her too and gives darshan to his devotees at this place as Nageshwar
The Sivalingam is facing South, with the Gomugam facing East. There is a story for this position. A devotee by name Naamdev was singing bhajans in front of the Lord. Other devotees asked him to stand aside and not hide the Lord. To this Naamdev asked them to suggest one direction in which the Lord does not exist, so that he can stand there. The enraged devotees carried him and left him on the southside. To their astonishment, they found that the Linga was now facing South with the Gomugam facing East.
On How to Get there: By Air - Jamnagar, 145 kms away, is the nearest airport.
By Rail - Dwarka is a station on the Ahmedabad-Okha broad gauge railway line connected to Jamnagar, Rajkot (217 kms) and Ahmedabad (378 kms). By Road - There is regular bus service from Jamnagar, Rajkot and other nearby towns connected to Dwarka.
Posted by Jolly R at 4:26 AM