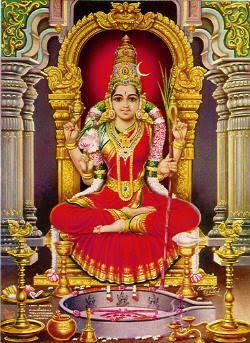 The town of Kanchi was the capital of the ancient Pallavas. The Kailasanathar temple here is one of the grand Pallava monuments. The Kamakshi Amman temple at Kanchipuram is an ancient one and is associated with Aadi Sankaracharya of the 1st millennium CE. The Tamil saying Kanchi Kamakshi, Madurai Meenakshi and Kaasi Visalakshi illustrates the importance of the Shakthi shrine that it is.
Ekambreswarar temple, the Kamakshiamman Temple and the Kumara Kottam temple and the Ulagalanda Perumaal Temple are the primary shrines in Periya Kanchipuram. The first three mentioned above are located in a manner as to suggest the Somaskanda manifestation of Shiva, Uma and Skanda in the town of Kanchi. There are no shrines to Ambal, in any of the shrines to Shiva in Kanchi. Kamakshi is considered to be wholly present in Kanchipuram, as the only Ambal shrine.

Kamakshi Amman Temple is a famous Hindu temple dedicated to Goddess Kamakshi a divine form of Parvati. It is located in the historic city Kanchipuram, near Chennai, India and is popularly associated with Adi Sankaracharya, one of the greatest Hindu saints. Along with Madurai Meenakshi, Thiruvanaikaval Akilandeswari, Vishalakshi Varanasi, Kamakshi is an important part of worship of Parvati.

It is interesting to note that the main deity is seated in a majestic Padmasana posture, an yogic posture signifying peace and prosperity, instead of the traditional standing pose in most other temples of Parvati. The goddess holds a sugarcane bow and lotus and parrot in the lower two of her arms (Many of the Hindu god forms generally have four arms) and has the two divine instruments Pasa and Angusa in her upper two arms. It is interesting to note that there are no traditional Parvati or Shakthi shrines in the city of Kanchipuram, apart from this temple, which is unusual in a traditional city that has hundreds of traditional temples.

There are various legends attributed to it. One of them according to Kamkshivilasa is that the Goddess had to absorb all the other shakthi forms to give boon to Manmatha (the Hindu god of fertility and love). Another legend attributes it to the Raja Rajeswari pose of the deity that signifies an absolute control over the land under its control, leaving no other forms of Shakthi.

Legend has it that Kamakshi offered worship to a Shivalingam made out of sand, under a mango tree and gained Shiva's hand in marriage.

Adi Sankaracharya is significantly associated in the rich history of the temple. Like many other ancient goddesses, the form of Kamakshi was less benign than the current form. There used to be various forms of animal and human sacrifices in ancient Shakthi temples and it is believed that Adi Sankaracharya led to the more peaceful representation of the goddess by placing a divine Chakra before it. And the goddess agreed to show her benign side in the temple, while the forms of Shakthi outside Kanchipuram still had more angrier forms of Shakthi. There is no verifiable historical proof for this, though it is a part of the local folklore. Symbolic of this, during the festivals when the processional deity is taken for a procession around the temple streets, it takes leave from Sankaracharya, at his shrine in the inner corridor. It is also believed that Sankaracharya defeated Buddhist and other philosophers in this place, sparking a revival for Hinduism.

The layout of the temple is rather complicated. The outer prakaram houses the temple tank, and several mandapams such as the 100 pillared hall, the dwajaarohana mandapam etc. Imposing views of the golden vimanam can be had from the outer prakaram, which is pierced with four entrances on all four sides. Images to Vishnu (Ninraan, Irundaan, Kidandaan) are seen near the temple tank. One enters the four pillared hall then the inner prakaram, and climbs a series of steps, and reaches the sanctum. Immediately surrounding the sanctum are small shrines to Ardhanareeswarar, Soundaryalakshmi, Kallar (who has been mentioned in the hymns of Tirumangaialwar) and Varaahi. In this prakaram are shrines to Bangaru Kamakshi, Maha Saraswathi and Aadi Sankaracharya.
Festivals:
Four worship services are offered each day. The jewels adorning the image of the deity are of great beauty. The annual festival is celebrated in the month of Maasi. The silver chariot festival falls on the 7th day. Other festivals include Navaratri, Aadi and Aippasi Pooram, Sankara Jayanthi and Vasanta Utsavam in Vaikasi.
Posted by Jolly R at 10:35 PM