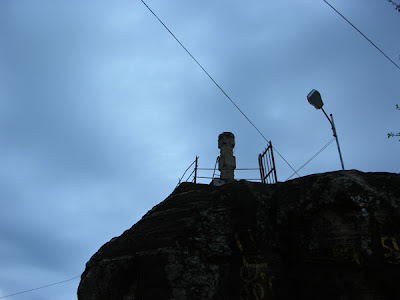 The famed SHANKARI Temple, in Sri Lanka, is one of the 18 Devi Temples (Ashta Dasha Shakti Peethas).
Many have heard the Ashtadasha Shakti Peetha Shloka starting with LANKAAYAAM SHAANKARI DEVI........... - composed by Sri Adi Shankara which means Shankari in Lanka. This Shloka enumerates the list of places of Devi temples which are considered to be part of the 18 Devi Peethas.
But almost nobody in Sri Lanka knew of any famous Devi Temple in the country. Even on Internet, not much authentic information was available. The temple is said to be in the famed town of Trincomalee on the eastern coast.
The Temple of Sri Shankari Devi according to the priest's in Trincomalee, say that the Portuguese who invaded the island in the 17th century completely cannon balled from their ship and demolished the cliff top Devi temple. In its site stands a lone pillar, as a mute spectator.
The present Shiva temple which is quite well known locally than the Shankari Temple was a recent construction. The Shiva is called as TRIKONESHVARA (Probably because it is in Trincomalee which is truly TRI CONA MALAI- meaning triangle shaped hill). There is a small Devi Shrine built adjacent the Shiva temple. The famed Bilva tree which is perched right on the edge of the hill some hundred meters above the Indian ocean. It is a exhilarating and spectacular sight to behold. All round, silence reflects whish is needed most in this war torn nation rightfully called as a paradise. There is also a more famous Kali temple in the heart of the town to which devotees can make a visit enroute from the Shankari Temple.
Posted by Jolly R at 12:16 AM