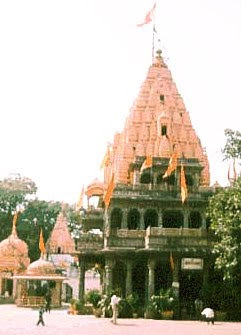 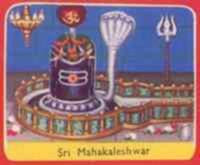 Ujjain, in Madhya Pradesh is one of the seven Moksha Sthalams. It is of historical importance, for it is the place of Vikramaditya & of poet Kalidasa. Ujjain is famous for the two Kali temples - Kali Devi who gave darshan to king Vikramaditya & a temple for the Mahakali who gave darshan to Kalidasa.
The theertam opposite the Mahakaleshwarar temple is known as Koditheertham & it is said that the colour of the waters of this theertham keeps changing. The Moola lingam is very small & is located underground. The lingam in the top level is called Ongareshwarar. The Kali Devi who gave darshan to Vikramaditya is known by the name Harasiddhi Matha.
There once lived a brahmin in Avanti, who had four sons, who were great devotees of Lord Siva. Dushanan, a demon was giving trouble, disturbing all good & religious activities. The brahmins from all over the land gathered with the four sons & performed pooja to Lord Siva. The spot where they had taken mud to make the Lingam, had become a huge pond. When Dushanan came to disturb their pooja, Lord Siva rose from this pond as Mahakaleshwarar & destoryed Dushanan. On the request of the brahmins, Lord Siva gave darshan to devotees at this sthalam, one of the Jyotir Linga sthalams.
HOW TO GET THERE : By Air : Indore- 53 KmBy
Rail : The nearest railway station is Ujjain By Road : Well connected to all cities.
Temple Website www.mahakaleshwar.nic.in
Posted by Jolly R at 12:44 AM