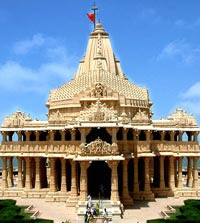 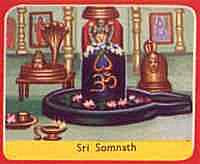 The Somnath temple is dedicated to Someshwara, another name of Lord Shiva with moon on his head. The temple is situated in Saurashtra. It is believed that Somraj, the Moon God himself had originally built the temple out of gold. Somnath is the first of all the 12 jyotirlingas. Though the temple is of Hindu origin, the Architecture has Jain influences.
The Somnath temple has been destroyed six times and have been rebuilt. The temple faces the east direction. Externally the Somnath temple resembles the Rudramala temple at Siddhapur. The dome of the temple is the biggest ever made in this century. The temple has large central hall with entrances on three sides, each protected by a lofty porch. The temple carvings and the sculptures speak about the great artistic endeavor made by the craftsmen of that era. At a certain interval in the balconied corridor is a deformed Nataraja statue. Somnath is also known by different names like- Deo pattan, Prabhas Pattan or Pattan Somnath. It is believed that 2000 priests served the idol of the temple. The Somnath temple has a long history attached to it. The first temple of Somnath is believed to have existed before the christian era. The second temple was built by the Maitraka Kings of Vallabhi in Gujarat. The Pratihara King- Nagabhata II constructed the third temple. The fourth temple was built by the Paramara King Bhoj of Malwa and the Solanki King. Kumarpal built the fifth temple and was again destroyed by Mughal emperor Aurangazeb. The present temple is the seventh temple and has been rebuilt and taken care by Shree Somnath trust.
HOW TO GET THERE :
By Road :State Transport buses and private luxury coaches connect various centres of Gujarat. By Rail :Veraval (5 kilometres) is nearest railway station .
By Air :The nearest airport is at Keshod, 47 kilometres, which is connected with Bombay.
Temple Website www.somnath.org
Posted by Jolly R at 11:37 PM