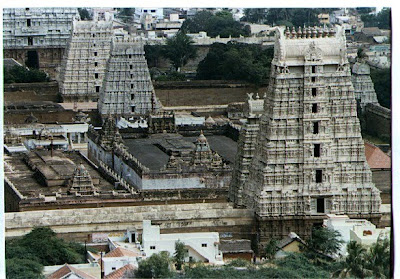 Tiruvannamalai is one of the greatest Saivite shrines in Tamil Nadu,India, on a sprawling 24 acre temple campus, drawing hundreds of thousands of pilgrims every full moon. The hill here is considered to be a manifestation of Shiva. Tiruvannamalai is one of the Panchabhoota Stalams signifying the 5 elements of wind (Kalahasti), water (Tiruvanaikka), fire (Tiruvannamalai), earth (Kanchipuram) and space (Chidambaram). Kartikai Deepam festival here is of great significance. Manikkavacakar composed his Tiruvempavai here. The Paatala Linga shrine is connected with the spritual savant Ramana Maharishi. Arunagiri Nathar began composing his Tiruppukazh here at this temple.

The temple has 9 towers and seven parakrams. The main tower (Rajagopuram) is 217 feet high with eleven stories, and is the second largest tower in South India.

History: In Thiruvannamalai, Lord Shiva took the form of a column of fire which had no beginning or end. This was done to destroy the ego of Lord Vishnu and Brahma. Lord Shiva in ardhanarashwari with one half being Goddess Umadevi is said to have given dharshan to his devotees. This temple was expanded by Chera, Chola, Pandiya and Nayak rulers. Auspicious Day: Pournami (Full Moon) Day. and also yearly once karthigai deepam
Posted by Jolly R at 10:28 PM

beautiful blog! will add you to my blogroll at arunachalacafe.com

Your appreciation gives me the feeling of satisfaction in having given a good blog to my viewers. Keep looking out for more. Tks.