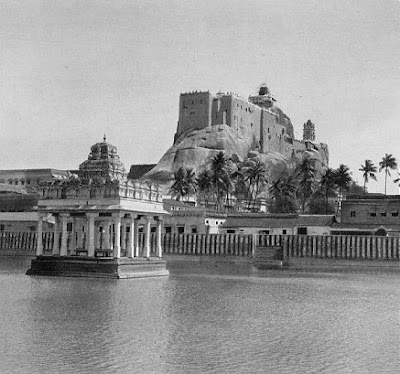 The Uchhi Pillayar temple situated on top of a hill is the most prominent landmark in the city of Tiruchirappalli in Tamilnadu. The entire Rockfort (Malaikkottai in Tami) temple complex carved into the hill here features three temples. The Manikka Vinayakar Temple is situated at the bottom of the hill, the famed Uchchi Pillaiyaar temple is on top of the hill. The hill temple gives a commanding view of the city of Tiruchirappalli, which is surrounded by sprawling temple complexes such as Srirangam and Tiruvanaikkaval (Jambukeswaram).
The Taayumaanavar (Maatrubhuteswara) temple, venerated by the hymns of the Tevaram Saints (7th - 9th century) is also at an elevation and is considered to be an engineering marvel.
Legends: An interesting legend surrounds the Uchchi Pillaiyaar Temple. Vibhishana, brother of Ravana, was returning home to Sri Lanka after having witnessed the coronation of Rama at Ayodhya, carrying with him, an image of Ranganatha (Vishnu) which Rama had given him for worship, with the caveat that the image would get stuck to the earth if placed it on the ground.
Vibhishana it is said, was proceding Southward with great care, when for inevitable reasons had to take a break on the banks of the Kaveri where he was affronted by Ganapati in the guise of a young lad, who promised to care for the image, allowing him to perform his morning rituals. The lad however dropped the image on the ground much to the chagrin of the enraged Vibhishana and the image took root in the Southern soil of India, and is now believed to be the venerated image of Ranganatha in the famed Sree Rangam Temple near Tiruchirappalli, while the image of Ganapati who caused the origin of the Ranganatha shrine at Sri Rangam is worshipped at the Uchchi Pillaiyaar temple.
Legends similar to this, surrounding Ganapati are associated with the Gokarna temple in Karnataka and with other temples such as the Vaidyanath Jyotirlinga Temple at Deogarh in Bihar where it is believed that Ganapati caused the installation of Shiva Lingams in a manner similar to the legend described above.
Posted by Jolly R at 10:38 PM