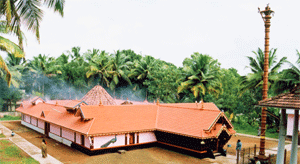 The Sree Subramanya Swami Temple, Thazhakkara and the diety “Shadadhara Parathishta” of Lord Murugan has a historical presence of over 1000 years. Lord Murugan, assuming a human form representing a diety, holding a spig of paddy and Fire (Torch) showers blessings on his devotees. The Lord carrying spig of paddy is interpreted as the custodian of wealth. The Lord is a great protector of his devotees and healer of physical and mental ailments. He protects each and every part of the body of his devotees and even the powerful Navagrahas would be passive because of his grace. He Himself is said to have told Naradan, "Those who have sought refuge in Me have no fear, they won't be left with any needs; those who are devoted to Me have no enemies, they have no diseases...". The temple stands as a symbol of cultural heritage, communal harmony and prosperity of the region. It is surrounded by rich greenery. Very recently, the temple has undergone several physical and spiritual renovations. It has attained the aura of a great temple. There is massive increase in number of pilgrims. The tide of devotees on shashti days is an evidence for this. Those who visit this website (given below) are requested to conduct a pilgrimage to the temple and experience the grace of Lord Subrahmanya Swamy. The permanent assets of land, pond and 'sarpa kavu' of this temple is spread over an area of over 1.75 acres. The temple is under the administrative control of ‘Haindava Seva Samithi , a body registered under the 12th Travancore-Cochin Literary Science Charitable Act of 1955. History According to the Astrological Enquiry/search [Devaprasnam], this temple was built by a Yogeeswaran over thousand years ago. In the early rears, the temple was under Edapally Elangur Swarupam. Later the title of the temple was found handed over to the Waryath family. The temple had under its possession lots of moveable and immovable assets. Though the administration of the temple was under the Waryath family, major festivals were planned and managed by the Thazakkara No:71. N.S.S. Karayogam. In 1979, the temple was taken over by Sree Subrahmanya Haindava Seva Samithi.

My appan Murugan is everything to me. Every year i try to make a pilgrimage to all of his famous temples in Tamil nadu. Being a keralin, i never knew that he is worshipped to such extend in kerala. Such a beautiful,ancient temple.My heart filled with such joy just viewing his temple.Kudos to you for highlithing this.You have made Murugan fanatics like me very happy.Now when i go to Kerala, I will visit this beautiful temple.
susilia,malaysia