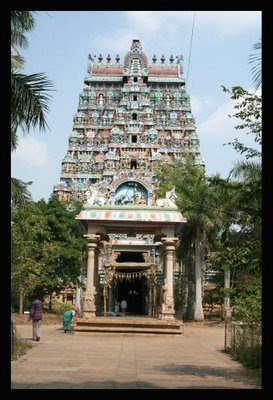 Appu sthalam (Water) - Tiruvanaikaval Thiruvanaikoil is a beautiful small urban village at Tiruchirappalli district ('Trichy', 'Thiruchirapalli', 'Tiruchinopoly', 'Tiruchi') in Tamil Nadu of Southern India. Thiruvanaikoil is also familiarly known as Tiruvanaikoil, Tiruvanaikaval, Thiruvanaikaval, Thiruvanaika, Thiruanaikaa. Thiruvanaikoil is around 3 Kms away from the heart of Trichy city and adjacent to Srirangam another small historic town and one of the holy places in India. Thiruvanaikoil and Srirangam are in the banks of river Cauvery. Literally these two places form an island, surrounded by river Cauvery and river Coleroon. This ancient temple dedicated to Shiva (Jambukeswara) and Parvati (Akhilandeswari) is one of the foremost Saivite shrines in Tamilnadu. This large temple celebrates Shiva as Jambukeswara, an embodiment of the element water and is often referred to as Appustalam and is hence one of the Pancha Bhoota Stalams the other four being Tiruvannamalai (fire), Chidambaram (Space), Kanchipuram (Earth) and Kalahasti (Air) respectively. The Sri Jambukeshwara Temple is dedicated to Lord Siva and has five concentric walls and seven gopurams. It is built around a Siva lingam partly submerged in water that comes from a spring in the sanctum sanctorum. Non-Hindus are not allowed inside the temple. The complex was built in the same time when Sri Ranganathaswamy temple was also built. The presiding deity is Lord Siva as Kalahasteeswarar. The Siva Linga here is one of the five supreme Lingas representing the five elements (Panchabutha Lingams): water (appu), fire (tejas), air (vayu), ether (akash) and earth (prithivi). The Linga form in Kalahasti is believed to represent vayu. Even today the flame placed in Garbhagraha inside the temple flickers indicating the presence of the wind while there is no entry of wind to disturb the flame. The air is just sufficient to breathe in. This according to a belief is the existence of Shiva in the temple. According to the legend there was once a forest of jambu trees in the place of modern Tiruvanaikka. Nearby was a tank called Chandratheertha which was filled by water from the river Cauvery. Lord shiva appeared as a Lingam under one of the trees. The lingam came to be called the Jambulingam. Due to a curse, two of the shiva ganas Pushpadanta and Malyava, were born in the forest as a white elephant and as a spider. The elephant worshipped the Lingam with flowers and with water brought in its trunk. The spider too worshipped the Lingam, spinning out a web over the Lingam to prevent leaves of the tree from falling on it. The spider's web appeared to be unclean for the elephant and it destroyed the web. This lead to big clash between the two and ultimately resulted in their death. Lord shiva granted Mokshaa (salvation) to both. The spider was born in a royal Chola family as the great king Ko Chenkannan who built about 70 temples (Maadakovils) including the temple of Jambukeswarar at Tiruvanaika. Because the king remembered about his earlier birth, he built the temples in a such way that no elephant can enter the sanctum sancotrum and come near the Sivalingam. The temple at Tiruvanaikaval is a big one covering an area of about 18 acres with high walls and gopurams on all the 4 sides. The temple has 5 prakarams. The main sanctum sancotrum (the 5th prakaram) can be reached by entering a series of Gopurams (Towers). The shrine for female deity Akilandeswari is situated in the 4th prakaram. Theerthams: There are nine Theerthams (Holy Water Points) near this temple.

With this Post, my Chapters on "PanchaBootha Sthalams/Temples" comes to an end. More on Temples to follow...