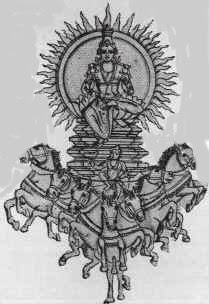 The Vedic scriptures of the Hindu religion refer to the sun as the store house of inexhaustible power and radiance. Ths sun god is referred to as Surya or Aditya. The Vedas are full of hymns describing the celestial body as the source and sustainer of all life on earth. The origin of the worship of the Sun in India is thus several centuries old. References to sun worship are found in the puranas. The Ramayana speaks of Sage Agastya initiating Rama into sun worship through the Aditya Hridaya Mantra. The astronomer and astrologer Varahamirhira makes references to the intricacies of ceremonies connected with the installation of the icon of the Sun. It is also said that Iran was once a center of Solar worship and that some of the Magha priests of Iran had been brought to India to officiate in ceremonies.

There are several temples enshrining the Sun God as the principal deity. Several temples dedicated to Shiva, feature a small shrine for Surya the Sun God. In addition, it is believed that Surya, the Sun God has offered worship at several of the shrines in Tamilnadu; many of these shrines have been designed in such a way that the sun's rays illuminate the sanctum (of Shiva) on certain days of the year. Several of the South Indian Temple Tanks also bear the name Surya Theertham or Surya Pushkarini.

This chapter of mine, takes readers on a journey through seven temples dedicated primarily to Surya, Dakshinaarka Temple in the Gangetic Plains, Suryanaar Koyil in South India, Arasavilli and Konark on the East Coast of India, Modhera in Gujarat (Western India), Surya Pahar in North Eastern India and Unao in Central India. It should be mentioned here that remains of an ancient Sun temple are found at Martanda near Srinagar in Kashmir. It is said to date back to the first century AD. Ruins of a sun temple which attracted thousands of visitors in the 7th century AD are found in Multan in Pakistan.

As with all other temples in India, legends and beliefs are associated with each of the above temples. It is interesting to note that one of the beliefs shared by worshippers at these temples situated so far apart - is that visits to these temples followed by a dip in the sacred tanks associated with them would bring relief to believers ailing from blindness, leprosy and other skin diseases.

is it possible to solve all problems