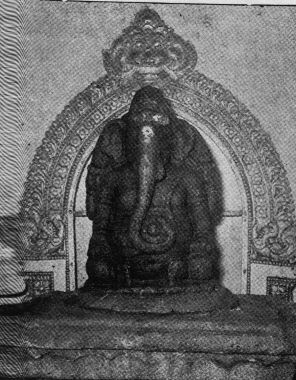 VATAPI GANAPATI is an image of Ganapati said to have been brought back by the Pallava King during his conquest of Badami, formerly known as Vatapi.
The town of Tiruchenkaatankudi near Nannilam near Thanjavur in Tamilnadu is home to the Tevara Shivastalam Ganapateeswaram. It has been revered by the hymns of the
Tamil Saivite Saints of the 1st millennium CE.
This temple also hosts an image of Vatapi Ganapati, an image of Ganapati brought back from Badami, the Chalukyan capital then known as Vatapi - by Sirutondar, a general of the then Pallava monarch (circa 7th century CE). The famous kriti Vatapi Ganapatim Bhaje by the composer Mutthuswamy Deekshitar, in the Karnatic music idiom salutes this deity.
Legend has it that Ganapati worshipped Shiva here for the sin of having killed the demon Gajamukhasuran. The elephant faced demon Gajamukhasuran, who had received a boon of immortality (subject to certain caveats) from Shiva, caused untold suffering to humans from his self made capital at Matangapuram. The elephant faced God Ganapati, vanquished the demon with his broken right tusk. The land here is believed to have turned red, thanks to the blood spilled by the demon, and hence the name Tiruchenkaattankudi in Tamil. Although the presiding deity here is Shiva, Ganapati receives the first place of honor.
Ganapati's worshipping Shiva is enacted in the form of a grand festival in the tamil month of Margazhi.
Posted by Jolly R at 9:09 PM