THE LEGEND OF MURUGA /SKANDHA 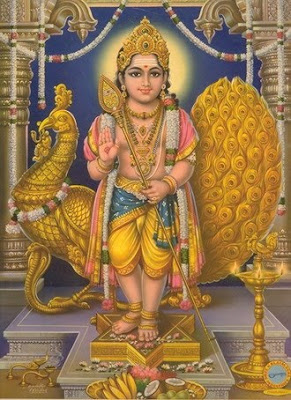 Muruga and Tamil
Of the various forms of the Supreme Godhead, that of Sri Muruga, the Lord Subrahmanya of the puranas (epics), is the most popular in Tamil Nadu. Like the Ayyappa legend of Kerala or the Srinivasa legend of Tirupati, Tamil Nadu has its own legend: Muruga, The Lord Subrahmanya, son of Shiva, who was born to kill Taraka Asura is worshipped as Muruga (the boy form of Subrahmanya), in all splendour and great romance found perhaps nowhere else. Hundreds or perhaps thousands, of temples all over the world offer worship to the Great God Muruga, but nowhere else he is worshipped with more fervour than in Tamil Nadu, whose natives consider Him as one among them. The love and respect that they bestow on Him is so great that they even gave a daughter of theirs, Valli in marriage to Him! To them He is almost human. His divine attributes do not frighten them. Muruga is called Tamil Kadavul, Tamil God. It is said that the word Murugan is synonymous with Tamil. I should mention that the knowledge of Tamil itself was imparted to the sage Agasthyar by none other than Muruga!
The six battle camps
Though most of Tamil Nadu's temples are devoted to Muruga, of special significance are the famous Aru Padai Veedu temples; These are said to be the temples erected at the six sites where Muruga had battle camps during His celestial fights with demons and evil powers. Though not traditionally counted among them, Marudhamalai temple is also considered equivalent. The legends attached to these six temples are partly from Puranas, partly local legends; The saint Nakkeerar who lived more than 2000 years ago composed the celebrated Murugaa Truppadai. It seems that some Muruga legends find their authenticity in the verses of Truppadai. Another notable classic is the Tiruppugazh sung by the sage Arunagirinathar who lived in the 14th century.
Kaumaaram: Sri Sankara's Sampradayas
Though Muruga worship was popular in Tamil Nadu (Kerala was also a part of the Tamil kingdoms then), since thousands of years ago, it was Sri Sankara who introduced authentic code of worship (sampradayas) for Muruga.. Out of the 6 sampradayas the great saint propagated, one is Kaumaaram, (of Kumara, Subrahmanya). Muruga is worshipped in Kerala as Subrahmanya and in some parts of Northern India as Karthikeya. The famous Muruga temples in Kerala are: Payyannur (Northern Kerala), Harippad (Alappuzha Dist.), Udayanapuram, Kidangoor, Kodumbu (Palakkad Dist.), Ulloor (near Thiruvananthapuram), Thampanoor (Thiruvananthapuram), Perunnai (near Changanassery, Kottayam Dist.) and Cheriyanadu near Chengannoor (Alappuzha Dist.).
My next post will start with the Murugan Temples/Sthalams known as "ARUPADAI VEEDU" and also some of the popular Murugan temples elsewhere.
Posted by Jolly R at 3:28 AM