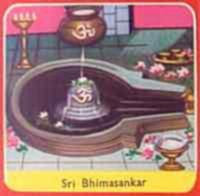 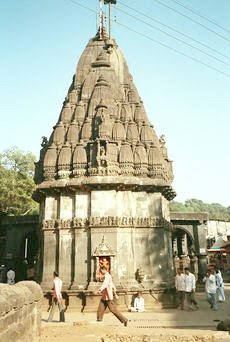 Bhimashankaram is located at Bhuvanagiri village in Pune, Maharashtra. River Bhima has its source here.
This temple in the Nagara style is an old and not a very large structure. The jyotir Lingam is situated on top of the Sahyadri hill temple. Lord Siva is considered to be taking rest here after the Trpurantaka samharam. The sweat drops of Lord Siva were converted as steam & is running as Bhimarati. New structures have been added. There are two idols of Nandideva. One idol is old, while the other is of fairly recent addition. There is a theertham & a well behind the temple structure. The Bhimashankarar Lingam measures around one and a half feet & quite narrow. The Goddess is worshipped as Kamalaja. Shivaji, the Maratha ruler had made rich endowments for the maintenance of the temple. The moola lingam is at a lower level.
There is another temple at Guwahati in Assam known as the Bhimshankaram and there is a belief that this is the real Bhimashankaram. Bhima was an asura, son of Kumbakarnan & Karkadi. On hearing that his grandfather, uncles & father had been killed by a brahmin & kings, he set out to destroy them. He undertook severe penance & got immense might and power from Lord Brahma. King Priyadarman of Kamarupa was also put under prison. Priyadarman & his wife Dakshinadevi prayed sincerely to Lord Shiva everyday. Fearing that they would overcome him, Bhima asked them to stop their prayers. When they refused, he set out to kill them. Lord Siva rose out of the Lingam that they had been worshipping & slayed Bhima. On the request of the Devas, Lord Siva resides here under the namam Bhimashankarar.
On How to Get there: By Air - The nearest airport is the Pune Airport which is at a distance of 95 kilometres from Bhimashankar.
By Rail - The nearest Railhead is the Pune which is at a distance of 95 kilometres from Bhimashankar. By Road - Bhimashankar is situated around 260 kms from Mumbai via Pune.From Pune You have to take the road that goes to Wada to reach Bhimashankar.
Posted by Jolly R at 3:10 AM